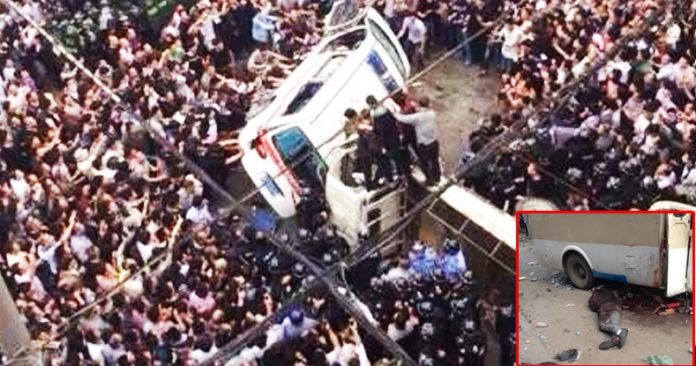 WENZHOU — Tens of thousands of enraged Chinese citizens crowded the streets after a horrific act of police abuse.

The citizens killed four police officers, and troops were called to minimize the rebellion.

According to reports, it began when the police were seen beating a woman in public.

RELATED: NO CONVICTION for Cop Who Crushed Dog’s Spine, Threw the Dog Down a Flight of Concrete Stairs, and Then Shot it to Death

A man who tried to film the incident was struck repeatedly by officers, so much that he began vomiting blood. According to reports, the man died on the way to the hospital.

In response, tens of thousands of Chinese citizens surrounded the officers and began attacking them with rocks and baseball bats, chanting “Kill them! Kill them for what we just saw them do!”

The officers, who were part of an elite law enforcement unit called Chengguan, were called “government thugs” and other names as they were stoned and beaten to death while trying to find shelter in their van, according to reports.

RELATED: Cop Who Tased Handcuffed Woman Gets Choked and Hospitalized by American Citizens

The officers were found dead, the van was smashed to pieces, and troops were called to disperse the rebellious crowd.

The truck that the troops were driving was also flipped over and riot police flooded the streets in an attempt to quell further dissent.

The images that follow are graphic. Discretion is advised. The man who died after being beaten by cops for filming them abuse a woman. Men swarmed the officers, who then retreated to their van. The van’s windows were smashed and it was flipped on its side, as the crowd threw chunks of cement at the officers and beat them with bats. Four officers inside of the van died as the crowd took pictures of them. Troops were eventually called to disperse the crowd. The crowd flipped the truck that the troops were driving and surrounded it.