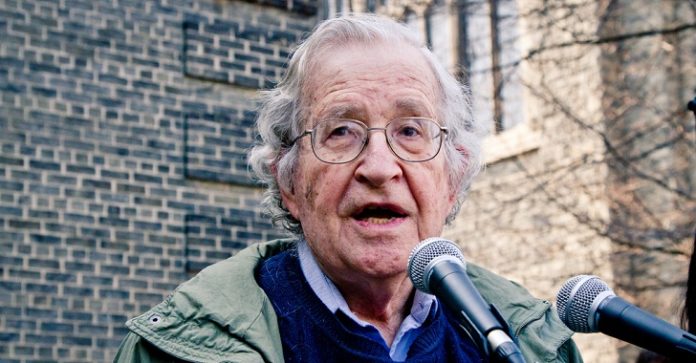 Professor Noam Chomsky offered several alarming insights about Israel’s possible true intentions surrounding Iran — and why we all should be concerned. In an interview with AcTVism Munich’s Zain Raza, Chomsky explained what happens to submarines Germany sends to Israel:

“These dolphin class submarines that Germany is providing to Israel are instantly refitted in Israel to have nuclear weapons capacity, and that’s not aimed at defense of Israel. They are meant for attack, that’s what they are. And we know what attack they’re aimed for in the short run: an attack on Iran in the Gulf. That’s a terrible threat, not only to Iranians, but to the world.”

If Israeli aggression against Palestinians could predict possible future behavior with other nations, which it arguably easily could, nuclear-armed submarines specifically intended to target Iran could be potentially highly dangerous as a trigger for unprecedented war.

“Israel, after all, has a doctrine. An official doctrine,” Chomsky continues. “They say, they’re free to attack Iran if they choose to. Furthermore, Israel is engaged in what the Pentagon has described as a war against Iran — and so is the United States. The U.S. Pentagon declares that cyber war is an act of war,” and NATO has agreed, making cyber attacks an offense which can be answered by military force. With that in mind, Chomsky explained, U.S. and Israeli cyber attacks against Iran, which they proudly claim responsibility for carrying out, should be considered“an act of war.”

He adds, “[T]o send submarines, which are, in effect, nuclear-armed submarines to Israel at this time is a radical act of adventurism.”

Though Chomsky doesn’t discuss it directly in the interview, United States aid to Israel likely makes possible the outfitting of submarines with nuclear capabilities. Officially, through the end of last year, the U.S. gave just over $3 billion annually in “security assistance” to Israel, though President Obama had sought to increase that total to $5 billion. Unofficially, however, as Grant Smith reported for Antiwar.com, more covert aid might total as much as $13.2 billion — though “the CIA refuses to disclose how much the Obama administration is secretly funneling to Israel, a matter now subject to a Freedom of Information lawsuit.”

Furthermore, just a hair under 70 percent of people in the U.S. say the government’s aid to Israel is “too much,” 32.5 percent of whom say the aid is “much too much.”

AcTVism’s interview with Chomsky also delves into the roles of the U.S. and other Western nations in the explosion of radicalized groups fighting in the Middle East — particularly fueled by the invasion of Iraq, which“hit the country like a sledgehammer.”


This article (Chomsky: Israel Acquiring Nuclear-Armed Submarines for Possible Attack on Iran) is free and open source. You have permission to republish this article under a Creative Commons license with attribution to Claire Bernish and theAntiMedia.org. Anti-Media Radio airs weeknights at 11pm Eastern/8pm Pacific. Image credit: Andrew Rusk. If you spot a typo, email [email protected].