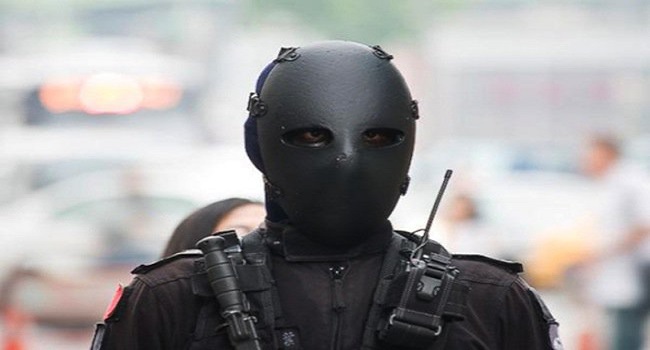 Taiwanese Special Forces and a select few other military units recently received updated bulletproof armor that includes a ballistic face mask that serves to protect operators from lethal head-shots and to reduce fighting effectiveness of opposing forces, seemingly by causing them to immediately curl into the fetal position and cry for their mothers. Check out one of the scariest-looking armies ever after the jump.

he United States has also used the ballistic mask for small teams in Iraq and Afghanistan, as well as during the drug war of the 1980s. A handful of these guys approaching is likely enough to disconcert even the most hardened cartel enforcer, but an entire platoon marching in lockstep is so terrifying we assume the weapons they’re carrying are just for show.

▼ After all, it’s hard to hit a target that’s fleeing full-sprint in the other direction.

Each ballistic mask is apparently rated to block close-range shots from a .44 magnum – which, if our extensive video game experience is any indication, is a hell of a weapon. It should be noted, however, that the mask distributes the impact of a bullet over a relatively small surface area, meaning a headshot, while not lethal to the mask wearer, is sure to ruin his day and probably his dating prospects for a very long time.

Other than the obvious added protection and intimidation factor of the masks, there is one other possible explanation for the Taiwanese government issuing them: they don’t want us to realize that they’ve actually just introduced a horrifying army of supersoldier Boba Fett clones.