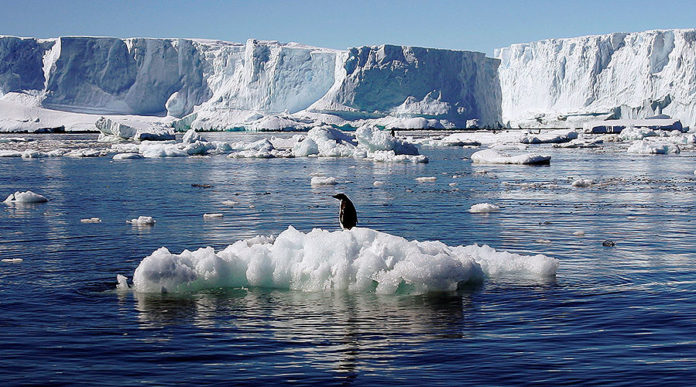 Sea ice in the polar regions has reached record lows after an area roughly the size of India has melted. The phenomenon is considered to be the latest effect of the record breaking temperatures recorded across the world.

The event has shocked scientists, with many now fearing they may have underestimated the severity of the issue. Over the last few decades, the Arctic region has rapidly lost sea ice. While scientists were concerned with the discovery, many were reassured by the increase of sea ice being recorded in Antarctica.

The expanding ice in Antarctica was often used as evidence to support the ideas of those who believe climate change isn’t man made. However, this recent finding suggests Antarctica may have been a sleeping giant simply waiting to rise from its slumber, leading many scientists to fear the effects of such an unexpected event.

“There are some really crazy things going on,” said Mark Serreze, director of the U.S. National Snow and Ice Data Center (NSIDC) in Boulder, Colorado.

Record breaking temperatures combined with unusual weather conditions, triggered by El Nino, are believed to be partially responsible for the momentous loss of sea ice. However, the cause of the sudden decrease in Antarctic sea ice is still uncertain.

John Turner from the British Antarctic Survey has a theory that may explain this surprising phenomenon. In November, cold westerly winds that travel across the continent were at their weakest in two decades, possibly contributing to higher temperatures in the south, Turner told Reuters.

Although these theories are likely to aid scientists in their quest to determine the factors that led to this momentous melting of sea ice, at this moment in time, researchers are still relatively uncertain about the underlying cause.

“When we began getting satellite data from 1979, the sea ice started to decrease. Everyone said it was global warming … but then it started to increase again,” said Turner.

In November, Arctic conditions had shown signs of improvement, with ice growing 88,000 square km (34,000 square miles) per day. In the winter, the average ice growth in the Arctic is around 69,600 square km per day.

However, in the middle of November, conditions started to rapidly decline. Sea ice in the Arctic region decreased by 50,000 sq km (19,300 square miles), a record low for the month of November.

“It’s an extraordinary departure from the norm,” said Anders Levermann, a professor at the Potsdam Institute for Climate Impact Research.

This year is set to be the hottest on record, with global land and ocean temperatures well surpassing the recorded average. In the Arctic, for example, November temperatures stood at 20 degrees Celsius (36 degrees Fahrenheit) warmer than average.

While it is currently unclear whether polar sea ice will continue to disappear at this accelerated pace, the unexpected phenomenon has increased concern about the future of these regions. Reduced ice floating on the Antarctic ocean could help to accelerate the number of glaciers slipping into the ocean, scientists say, leading the way to rising sea levels that could devastate many low-lying coastal areas and islands.

This article (Chunk of Polar Ice the Size of India Melts into Ocean) is a free and open source. You have permission to republish this article under a Creative Commons license with attribution to the author and AnonHQ.com.