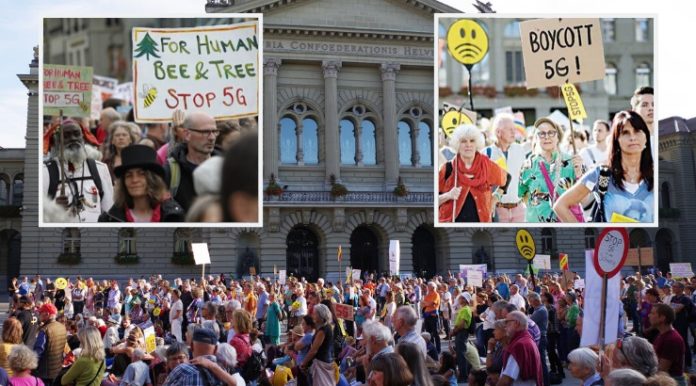 5G, or 5th generation cellular technology, is proving to be the most controversial generation yet as a growing number of people across the planet demand answers regarding the safety of the emerging technology. Protests, marches, rallies, documentary screenings, and teach-ins are set to take place on January 25 as part of the “Global 5G Protest Day.”

The stated goal of the event is to “stop the deployment of millions of 5G antennas on Earth and 50,000 5G satellites in space, and to secure emergency high-level meetings with officials in governments and international governmental organizations including the European Union, the United Nations, and the World Health Organization.”

According to the Stop 5G International website, in the days leading up to the Global Day of Protest activists will deliver copies of the International Appeal to Stop 5G on Earth and in Space to local governments in hopes of raising awareness about the concerns surrounding the technology. The 5G Space Appeal is a statement signed by a reported 191,733 signatories from 203 nations and territories.

“We the undersigned scientists, doctors, environmental organizations and citizens, urgently call for a halt to the deployment of the 5G (fifth generation) wireless network, including 5G from space satellites. 5G will massively increase exposure to radio frequency (RF) radiation on top of the 2G, 3G and 4G networks for telecommunications already in place. RF radiation has been proven harmful for humans and the environment. The deployment of 5G constitutes an experiment on humanity and the environment that is defined as a crime under international law.“

5G technology is expected to herald the beginning of Smart Cities where driverless cars, pollution sensors, cell phones, traffic lights, and thousands of other devices interact in what is known as “The Internet of Things.” However, there have been a number of health and privacy concerns raised by opponents of the rapidly advancing 5G expansion. It is these concerns which has sparked a global movement against the technology and electromagnetic frequencies (EMF’s) in general. The organizers of the Global Day of Protest are calling for concerned citizens to organize actions in the form of candle-light vigils, marches, music events, or rallies.

“While the media’s attention with regard to environmental issues has been captured by climate change, fracking, and plastics in the ocean, an International Appeal to Stop 5G on Earth and in Space has been quietly making its way around the world,” reads a press release from Stop 5G International. “Signed by 4,800 scientists, 2,800 medical doctors, 770 beekeepers, 2,000 environmental organizations, and 180,000 others from 202 countries and territories, this Appeal calls on the world’s governments to stop the deployment of 5G.”

The organizers state that their concerns are focused on the apparent increase in radiation as a result of a massive increase in cell towers and small cells which are necessary for 5G to operate at full capacity with low latency. “Instead of cell towers every few miles, there will be cell towers—small but powerful—in front of every third to fifth home. Instead of 2,000 satellites orbiting the Earth, there will shortly be 50,000,” the group wrote.

Federal Communication Commission Commissioner Ajit Pai has estimated that there will be 800,000 new small cells and cell towers installed around the United States to complete the 5G grid.

Despite the growing concern from scientists, health professionals, legal experts, politicians, and activists the FCC has wholeheartedly endorsed the rollout of 5G claiming that there are no public health concerns. As the Mind Unleashed has previously reported, cities and localities are raising alarm bells due to the federal government and their partners in Big Wireless usurping local control of 5G expansion. In 2019, the Mayor of Danville, California went so far as to admit that the city council had “lost control” of the 5G rollout to the federal government and Big Wireless.

According to the FCC’s regulations, local governing bodies are not allowed to consider health risks when making their decisions. This is because the federal law known as the Wireless Communications Act of 1996 prohibits local jurisdictions from considering perceived health effects when taking an action on a proposed facility.

Instead, cities and towns can only regulate cell sites based on the aesthetics and placement of the devices. This problem was only made worse in September 2018 when the FCC passed a new rule putting the federal government in complete control of the 5G rollout. In April 2019, President Trump issued an executive order stating that local and state bodies must now approve new 5G infrastructure within 90 days. The Trump administration also initiated a cap on the fees local governments can charge telecom companies wanting to install 5G technology.

Although Big Wireless has invested billions in the so-called “Race to 5G,” a diverse group of people from nations around the world are coming together to ask important questions about this new technology and the role that digital technology plays in our lives. If you are concerned about the effects of 5G, EMFs, and radiofrequency radiation consider getting involved in a local event or creating one for your community.

Find more details on events here. Join the Stop 5G Global Protest Day Facebook group to share your events and ideas with others around the world. If you are looking for ideas for posters or signs check out this helpful site from Americans for Responsible Technology.