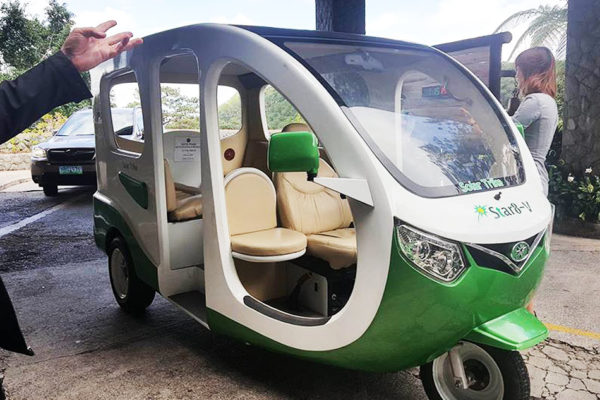 Transportation is critical in our daily lives. Wherever we are, we need to move from one place to the other, and usually use vehicles to do this.

However, many of these vehicles that we use daily, serve us with a great cost. Fuel-powered and emitting toxins into the atmosphere, these later affect us collectively.

To solve this huge problem, people are searching for alternative solutions; inventing vehicles powered with clean and sustainable energy to save the Earth from the pollution of fuel-powered vehicles. In the Philippines, a city with regular visitors has taken up the initiative of leading a fuel pollution-free environment. The mountain city of universities, resorts and shops is called Baguio. Located in the country’s Luzon Island – the Philippines’ largest and most populated Island – the popular tourist city is also full of restaurants and entertainment centers.

Due to the huge number of visitors in the city, the roads are always congested with fuel vehicles. Last year, citizens of the city expressed concerns about the rising level of air pollution caused by fuel consuming vehicles. This made city officials examine the problem holistically.

City officials opened the doors to any individual or organization with a solution to the problem. The non-government organization Glad to be Green proposed a suggestion to officials, for a company that will supply the city with solar-powered vehicles, to solve the pollution problem. Officials, impressed with the proposal, approved it. The Solar Tricycle, driven exactly like a regular tricycle, can accommodate up to 10 passengers. The cost is a cool $2,000.

The second vehicle is the Solar Bus. It takes up to 20 passengers and costs $20,000. The vehicles contain the solar technology on the rooftops. Once fully charged within two hours, the vehicles can reach a distance of up to 120-150 kilometers. The inventor of the solar vehicles, Yacov Maimon said the solar technology of the vehicles is current and efficient than others. “Unlike other solar technology, this does not need to be in direct sunlight; as long as there is light from the sun, it will charge.”

The solar-powered vehicles are currently under testing in the city. Glad to be Green spokespeople confirmed at local media level that the Baguio City Mayor, Mauricio Domogan authorized a two-month demonstration period for the vehicles, ensuring their running efficiency.

It is also revealed Mayor Domogan and his local government are excited with the new solar technology in the vehicles. Reports suggest the same solar technology will be used to lessen the electricity expenses in the city hall, as well as connect heat to the city’s swimming pool. This has heightened speculation in the city that the city will soon turn to full usage of solar and other renewable energy. The city is also likely to announce the gradual ban of fuel-powered vehicles once the solar-powered vehicles prove very efficient.

This article (City in Philippines Authorizes Solar-Powered Vehicle to Curb Air Pollution [Photos]) is a free and open source. You have permission to republish this article under a Creative Commons license with attribution to the author and AnonHQ.com