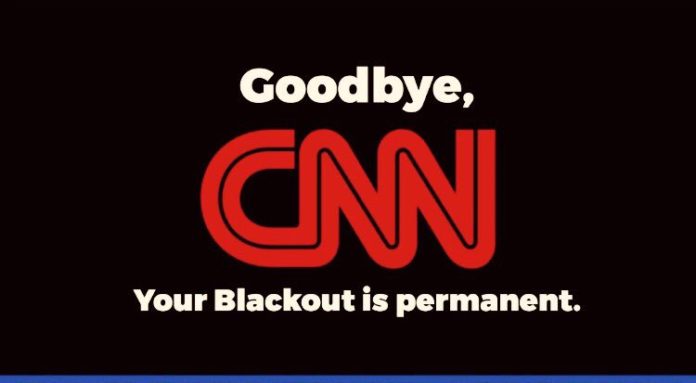 So, this is how it works: Any alt media have a target painted on their home page if they dare to print contrary to the corporate agenda – risking the banner ‘fake news.’ But when CNN – the well-known pro-Clinton mainstream news organization – aired an obviously bias interview with Phil Mudd, ex-Deputy Director of the CIA, all they had to do was retract and issue an apology.

To tarnish someone as a paedophile is a bold move by anyone; to do it without evidence is well… ‘fake news.’ Such an accusation must hold truth as well as accountability, and when Mudd decided to make an on-air statement accusing WikiLeaks founder Julian Assange of pedophilia, something had to give.

Then comes the lawsuit threat from WikiLeaks, and CNN very quickly retracted the accusation sent along with an apology for airing the segment, conceding that “CNN has no evidence to support that assertion.”

CNN, also in fear of being a target of their own fake news agenda quickly deleted a tweet that included the video clip and continued with their statement “regretted the error” made by its guest: “Assange is currently wanted for extradition to Sweden to face sexual assault allegations there, and no evidence suggests that the women involved were minors. We regret the error.”

We’ve deleted a tweet that included a video clip from New Day earlier this morning. Here’s our statement: pic.twitter.com/qJqTtzy69T

To be clear, so as not to also get caught up in the fake news web, one accusation against Assange does exist where pornographic material was supposedly sent from Assange to an 8-year-old girl in the Bahamas. However, it is vital that there was no known evidence suggesting this to be legitimate and that no crime was ever reported by the girl’s family. Further to that, the assistant commissioner of the Royal Bahama Police Force stated, “We got a phone call of someone giving us some information. But we never had a face-to-face. It could have been a hoax,” reports Tyler Durden of Zero Hedge.

The irony isn’t lost that alt media extremes such as Infowars (top of the fake news list that was propagated online) was one of the first media outlets to pick up on CNN’s faux pas.

We have issued instructions to sue CNN for defamation:https://t.co/YLfyQ9ROCy

Unless within 48h they air a one hour expose of the plot.

Nonetheless, the news has gone viral. Twitter users expressed their outrage at the mild “regret” that CNN posted, demanding explanation or urging WikiLeaks to “sue those bastards.” The corporate hypocrisy is damning.

This is yet a case of a corporate news organization attempting another smear campaign shortly after Assange has adamantly stated that the Russians had nothing to do with the Podesta files leak, blowing out of the water Obama’s handling of foreign matters, and his administration’s agenda.

After all, what better way to discredit anyone than by labelling them a pedophile?

This article (As WikiLeaks Prepares Lawsuit, CNN Retracts Fake News Statement ‘Assange is a Pedophile’) is a free and open source. You have permission to republish this article under a Creative Commons license with attribution to the author AnonWatcher and AnonHQ.com.