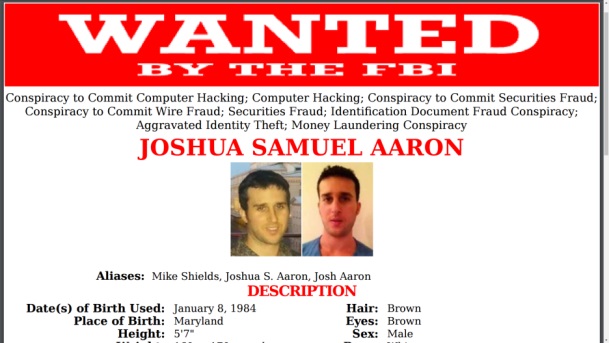 One of the most wanted hackers on the 2015 FBI list was Joshua Samuel Aaron. He was behind the largest financial data theft in American history, and was finally caught and arrested at New York’s JFK airport. Aaron was initially believed to have resided in Moscow, Russia, hiding as a wanted fugitive after being charged with hacking crimes back in 2015. His hacking talents had left exposed the personal information of more than 100 million individuals.

Preet Bharara, a Manhattan U.S. Attorney, announced, “Aaron allegedly worked to hack into the networks of dozens of American companies, ultimately leading to the largest theft of personal information from US financial institutions ever.

“For pursuing what we have called ‘hacking as a business model’, and thanks to the efforts of the FBI and the US Secret Service, Aaron will now join his co-defendants to face justice in a Manhattan federal courtroom.”

The US Court of the Southern District of New York charged three hackers, Gery Shalon, Ziv Orenstein, and Joshua Smauel Aaron in 2015, with a total of 23 counts. The charges included hacking, identity theft, securities fraud, money laundering, and other counts of criminal intent.

Two of the hackers, Shalon and Orenstein, were arrested in July 2015, in Israel and were extradited back to the United States in June 2016. Aaron is scheduled to appear in a federal court in Manhattan on this coming Thursday. When they appeared in court, the two pleaded not guilty to their charges.

Aaron was 32 when he was arrested at the JFK airport. He pleaded not guilty to a 22 count indictment that was charging him with conspiracy computer hacking, wire fraud and other charges. Aaron’s attorney, Benjamin Brafman, stated that Aaron did waive the extradition process as well as asylum in Russia. In fact, Aaron voluntarily came back to the United States to “responsibly address the charges.”

This article (FBI’s Most Wanted Hacker Arrested in New York) is a free and open source. You have permission to republish this article under a Creative Commons license with attribution to the author and AnonHQ.com.