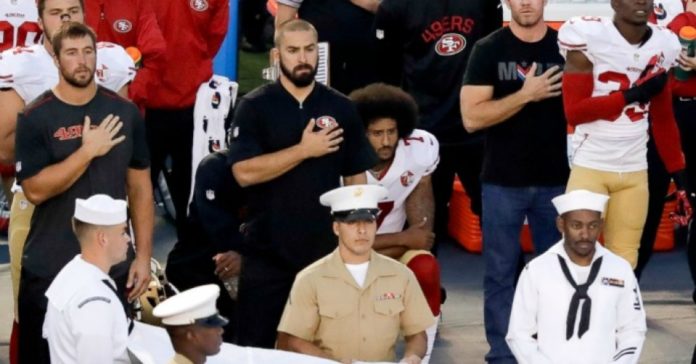 San Francisco 49ers quarterback Colin Kaepernick‘s protest is growing, and with it, his mission.

When Kaepernick kneeled during the national anthem ahead of the 49ers’ Thursday night preseason finale against the San Diego Chargers, he was joined by his teammate Eric Reid—while further up the coast, Seattle Seahawks cornerback Jeremy Lane also sat down in solidarity as the anthem played ahead of a game against the Oakland Raiders.

When the song ended, the two players stood and embraced. “It was amazing,” Kaepernick told ESPN. “Me and Eric had many conversations and he approached me and said ‘I support what you’re doing, I support what your message is, let’s think about how we can do this together.’ We talked about it at length and we wanted to make sure the message that we’re trying to send isn’t lost with the actions that come along with it.”

Those actions have now expanded, as Kaepernick on Thursday pledged to donate $1 million of his salary to community organizations focused on social justice causes.

In Oakland, Lane was the only member of either team to sit down during the anthem. He said he didn’t know Kaepernick personally, but was “standing behind” him. After the game, he said, “It’s something I plan to keep doing until I feel like justice is being served.”