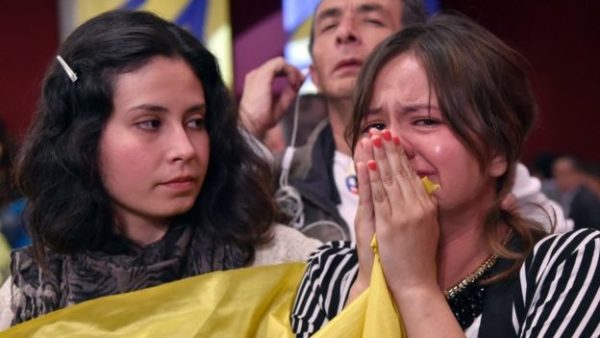 Since 1964, the Revolutionary Armed Forces of Colombia (FARC) has tormented successive governments of the country.

The FARC believes in Marxism-Leninism ideology. It is an extreme left-wing nationalist socialist faction. It was formed during the Cold War period, and it is a strong opponent of the United States.

The group is considered by some observers as the richest rebel group in the world. In the past, some of its funding came from kidnapping and ransom taking, including foreign workers in the country. During the peak of the conflict, the FARC employed a variety of military tactics in addition to more unconventional methods. At one point, the European Union labeled the group as a terrorist organization. There have been several attempts in the past to negotiate a ceasefire deal with the rebels, but all have proved futile.

However, in the past four years, the current president of the country, Juan Manuel Santos, has made concerted effort to reach a peace deal with the FARC.

With the help of peace activists such as Sri Sri Ravi Shankar, the FARC announced a unilateral ceasefire July 2015. Along with Cuba, Chile, Venezuela and Norway, further peace talks were held between FARC top officials and the Colombian government in the Cuban capital, Havana. On June 23, 2016, a ceasefire accord was finally signed between the FARC and Colombian government in Havana.  However, it was agreed that a final peace accord will require a referendum to finalize the process.

Since the ceasefire accord was signed in June, President Santos has campaigned vigorously for his country’s citizens to forget the past and approve the peace deal in the referendum. The poll was scheduled on Sunday, Oct. 2, 2016.

However, among those who oppose the peace deal is the former President, Alvaro Uribe. Uribe has also led a campaign, urging voters to reject the peace deal. According to him, the FARC rebels should pay for the crimes they have committed, and should never be welcomed into society. However, after a few months of campaign in favor of the peace deal in the referendum, Santos has narrowly lost the poll. The country’s voters surprisingly rejected the peace deal between the government and the FARC. A final count showed that out of the 13 million people who voted, 50.2% rejected the peace deal, while 49.8% favored it. This means the peace deal is now in a state of fragility, since it did not get the overwhelming approval of the people. On the other hand, if voters had accepted the deal, it would have allowed FARC fighters to re-enter society and form a political party to participate in the governing process of the country.

Before the vote, political observers in the country had given the “yes” camp a lead in the referendum. Some even said it was a ‘done deal’ for voters, and that the peace deal would be accepted. After the vote, however, many observers expressed shock at the unexpected results.

Al Jazeera reported that at the headquarters of the “yes” campaign, people were angry and in shock when the final results were declared. Some were in tears, while others chanted “we want peace.”

President Santos, who had promoted the “yes” campaign, said after results were announced, the bilateral ceasefire with the FARC is still in effect, and should continue to be in effect. He said he would reach out to the country’s opposition leaders; and had also ordered government negotiators to return to Cuba as soon as possible, to consult with FARC leaders on the next best way forward. “I won’t give up. I’ll continue to search for peace until the last moment of my mandate,” the president was quoted as saying.

The leader of the FARC, Rodrigo Londono, popularly known as Timochenko, released a statement saying how the group will continue to maintain its desire for peace, despite the referendum outcome. “The FARC reiterates its disposition to use only words as a weapon to build towards the future. To the Colombian people who dream of peace, count on us, peace will triumph.”

As it stands now, what happens next is difficult to predict. We can only hope that the FARC will not return to a war with Colombia again. Pray for peace in Colombia!

This article (Colombia Rejects Peace Deal with FARC Rebels in a Shocking Referendum) is a free and open source. You have permission to republish this article under a Creative Commons license with attribution to the author and AnonHQ.com.