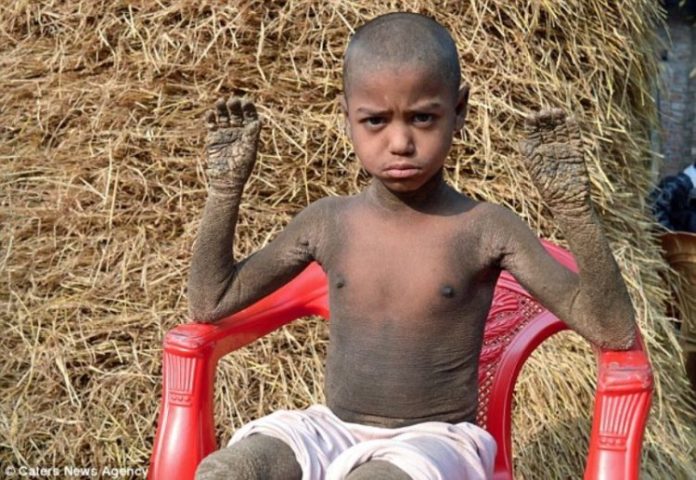 This story is heartbreaking, and represents some events occurring in this life as unexplainable. In such cases, our reaction as a community would determine the intensity of such events.

In the remote village of Dona Raninagar in northern Bangladesh, an eight-year-old boy named Mehendi Hassan has been hit with a rare skin disease that is turning his entire body to stone. The only normal part of Mehendi’s body is his head.

Due to the strange disease, Mehendi has been completely shunned by the whole community in which he lives. This has forced Mehendi to stay indoors all his life.  Community leaders claim Mehendi terrifies other children when he comes into contact with them. Mehendi has been left isolated, with no access to education and social life. While Mehendi’s face looks normal, the rest of his body is covered in thick, scaly skin, making it difficult for him to walk or touch anything.

According to Mehendi’s mother, even his grandmother detests him, and has been ridiculing the poor boy’s condition.

Mehendi is said to be struggling to even wear clothes, as the slightest of friction to his skin is excruciating. Mehendi was forced out of school due to discrimination and bullying by other pupils.

Mehendi’s mother Jahanara Begum explained the ordeal of her son: “Other children detest him. People find him filthy because of his condition. He has been home for eight years because whenever he goes out, villagers get scared and say bad things to him. Everyone hates him, no one likes to see him or eat in front of him. Not even my mother-in-law. I beg government to help my child. It upsets him so I keep him at home. He always cries out in pain. It is devastating to see him suffering.” According to Jahanara and her husband Abul Kalam Azad, she gave birth to a very healthy boy. Mehendi reportedly weighed 12 pounds when he was born. But after only 12 days, Jahanara said she and her husband noticed minor rashes on his body.

They ignored it, thinking it was mosquito bites, but soon the rashes spread from his heel to his abdomen, and within three months, his fingers, chest and back were beginning to cover in a thick, scaly skin.

The concerned parents consulted various local doctors, trying all forms of medicines to heal their son, but nothing could control the outbreak. Frustrated and broke, they eventually stopped his treatment.

Mehendi’s father, Azad, is a van driver who earns a low salary. Mr Azad revealed he has spent what little savings he had to cure his son, but to no avail. According to him, the family has tried many doctors, physicians and skin experts, but none could cure or tell the cause of the strange disease.

“No doctor could diagnose the disease. They all say he suffers from a rare skin disease but no one has been able to cure him. I have no money left.  Whatever little I could earn from driving a van, I spent it on his treatment.  Whenever I could save a little, say £10, I would take him to doctors. Eventually, all my savings and earnings were exhausted on his treatment but there was no cure. Frustrated, I stopped taking him to doctors. For last year he has not seen any doctor,” Mr Azad said about the situation of his son. Physicians believe Mehendi’s case is severe, but are still clueless as to what the condition is, what caused it, and if it can be cured. A pediatrician, Dr. Mohammad Emdadul Haque, was quoted by MailOnline as saying: “He was brought to us for treatment. The patient is suffering from a rare kind of skin disease. We do not receive such cases normally. It is hard to say what he is suffering from. We have referred him to advanced skin specialists.”

Mehendi’s mother is always in tears over the devastating condition of his son. She is appealing to the Bangladeshi government, as well as all philanthropic organizations or individuals to help the family cure their son’s strange disease.

“I beg government to please come forward and help me with his treatment so that he too can live as a normal human. I have been struggling a lot raising him up. Seeing him in pain is unbearable,” she said.

Mehendi is being tormented by this strange skin disease. We urge philanthropic organizations or individuals who can provide some sort of help to make contact with the family in Bangladesh. Anybody who can provide help should contact Caters News Agency on Facebook or on this number +44 121 616 1100. The news agency has been closely following the disturbing condition of Mehendi.

This article (Community Abandons Eight-Year-Old Boy Who is Turning to Stone [Photos]) is a free and open source. You have permission to republish this article under a Creative Commons license with attribution to the author and AnonHQ.com.