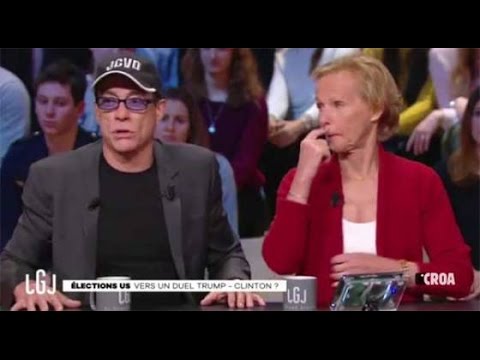 Jean-Claude Van Damme was invited to the French show Le Grand Journal to speak about the American elections; Donald Trump, Ted Cruz and Vladimir Putin. However, the actor pulled no punches when he decided to take control of the preset narrative and talk about an issue he felt was far more important.

“Well, they are not going to win,” he says of Donald Trump or Ted Cruise. “You still have the Rockefeller, people like the Rothschild, those big families that dominate continent.these are families that rise in 1827, a family with five sons that expands, it’s above everything we’re talking [about] tonight,” he said.

“So you have the lobbyists, people that are candidate to the elections, and then you have people like Donald Trump, who has what? 10 Billion Euros? He might have more but that’s what he declares in legal documents. In any case, if I myself have the goods, and worked all my life for my families, my friends, for my country where I pay my taxes.

What he wants first in my opinion is to protect his interests, whereas someone who works for free is someone dangerous. It’s true we have problems with globalism because of the globalists. To get out of globalism is to leave the world alone. It’s a different philosophy. Hang on for a second, I was asked if I knew politics,” he said. “I’m aware.”

This article ( Jean-Claude Van Damme speaks about Rothschilds and Rockefellers on Live TV) is a free and open source. You have permission to republish this article under a Creative Commons license with attribution to the author(CoNN) and AnonHQ.com.