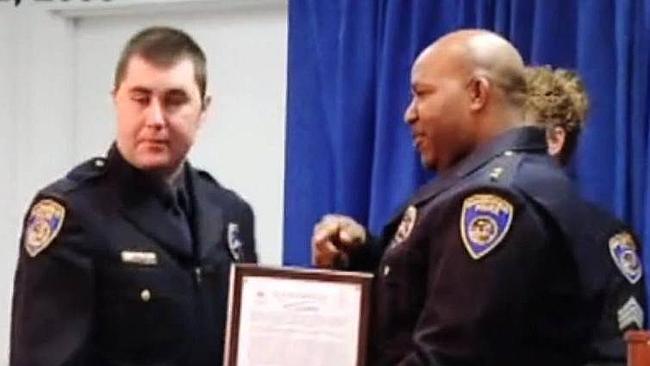 A trainee cop, Lindy DeGeare as well as a female witness both stated that Aaron Stinger, a cop from Bakersfield, California police department was fondling with the dead body of a recently deceased man, saying that he “loves playing with dead bodies” but told the woman not to tell anybody.

Stinger was going through his daily work routine receiving calls for different jobs when he received a call in to join the high speed chase for 22 year old Ramiro James Villegas. Stinger and the other officers stopped their cars and aimed their guns at Ramiro after he crashed and left his car, the officers fired upon Ramiro killing him after he put his hand towards his waist with the cops assuming that he was armed and had a weapon, it was later found that Ramiro was unarmed.

A witness said that Stinger volunteered that him and his partner would go down to the Kern Medical Center in Bakersfield to help identify and examine the body.

Once Stinger and his partner arrived at the morgue, Stinger asked if he could take a look at the body and was given a passcode to the vault.

Stinger’s partner, Lindy DeGeare, reported later on that Stinger was running his fingers along the deceased victim’s foot from earlier that day and was saying “tickle, tickle”, Lindy also mentioned that Stinger was rattling Ramiro’s head back and forth.

Aaron Stinger wrote things in his daily report about being in the morgue but did not mention anything about tickling Ramiro’s feet or rattling his head.

According to the Bakersfield California local prosecutors, making charges against Stinger was intended but was dropped due to the lack of evidence, he is now currently being investigated by his home police department and has been put on temporary leave while they take actions.

A lawyer for the Villegas family said that they are as well “very close” to filing a law suit against Stinger for the actions that allegedly took place at the morgue.