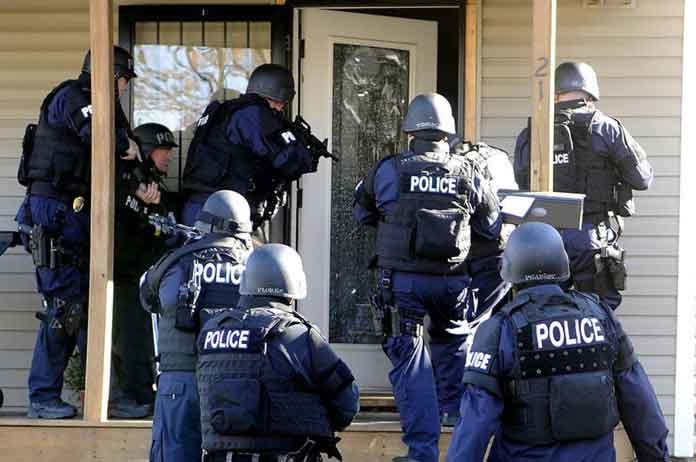 A federal appeals court has just ruled that police can knock on your door and kill you, even if they’re in the wrong place. The ruling stemmed from an incident in 2012, where a Lake County Florida deputy, randomly knocking on doors with an armed brigade of deputies behind him, shot and killed a man who did nothing wrong other than answer his door for the police.

According to reports, Deputy Richard Sylvester was in pursuit of a motorcycle that had fled from another jurisdiction. Sylvester claimed that he believed that the subject on the motorcycle was armed and dangerous, despite not having personally contacted the driver. No information about a weapon had been provided in any other part of the police documentation. Sylvester saw the motorcycle parked in an apartment complex, and instead of taking other routes to identify and apprehend the driver, he began banging on doors in the vicinity. Sylvester started banging on door 114. Andrew Scott and his girlfriend, Amy Young, were inside playing video games. Another deputy had reportedly been informed by a neighbor that the motorcycle didn’t belong to Scott, but allegedly, Sylvester didn’t receive the memo. Sylvester pounded on the door, like cops usually do. Frightened by the banging on his door and the lack of announcement or identification from the police, he grabbed his gun. When he answered the door, he saw the police drawing down on him and he proceeded to back up into his apartment. As he did this, Deputy Sylvester unloaded his weapon into Scott, killing him.

Despite the facts of the case, all legal attempts to seek justice against Deputy Sylvester and the Lake County Sheriff have been thwarted. The US Court of Appeals for the Eleventh Circuit found that Sylvester was in fact protected by qualified immunity. They stated that they couldn’t establish that he had violated any established law. And this is how murders by police fall through the cracks. The decision by the court was in fact split, with four justices dissenting. “First, under no standard was it reasonable for the police to kill Mr. Scott when he answered the knock at the door to his home. He was not suspected of any crime (much less a violent crime) and he was standing inside his own house without threatening them. Second, the police were not engaged in a permissible “knock and talk” when they killed Mr. Scott. Their aggressive tactics crossed far over the line from a consensual visit into a warrantless raid. When it upheld these rulings by the District Court, the panel (and now a majority of this Court) gave a pass to dangerous, unconstitutional police actions in a way that makes it more likely that tragic police shootings will continue to occur.”

Unfortunately, the majority findings with Sylvester put an end to any hope that the family of Andrew Scott could ever achieve justice. Police will certainly refer to this case as an example of the war against cops and how police need to be able to defend themselves against violent criminals. The circumstances in this case were the result of shoddy police work and the quick-to-shoot mentality that much of America’s police forces embody.

The ruling by the court flies in the face of the second amendment and the right to bear arms, especially in one’s own home, and brings us one step closer to a fully-fledged police state.

This article (Cops Can Kill You Even If They’re in the Wrong Home, Says Federal Court) is a free and open source. You have permission to republish this article under a Creative Commons license with attribution to the author and AnonHQ.com.