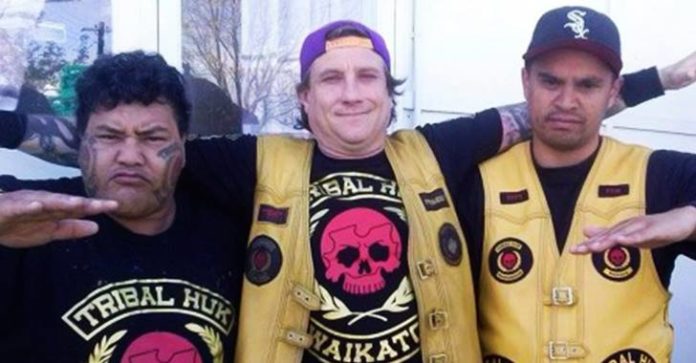 A gang in New Zealand assumed the role police officers have long claimed to be playing for our communities: they rid their town of its methamphetamine dealers.

This past week, Tribal Huk gang leader Jamie Pink delivered an ultimatum to drug dealers in the Waikato town of Ngaruawahia. He advised them the deadline for them to leave was 6.30pm the following day and that visits would be paid to those who hadn’t left.

“For a lot of years, the Huks have kept a lot of other gangs out of here in Ngaruawahia and we are always going to do that, but we haven’t kept their poison out of here,” Pink stated.

“From this second on, without disrespecting, we know who they are – some of them are whanau [family], but they’ve got to go. They have 24 hours to stop. We ask nicely first, then they’ve got to go. We’ve got no choice. The kids are asking for it. They’ll be asked nicely the first time.”

Pink had no problem explaining to the media what would happen if the dealers refused to leave quietly.

Vigilantism, as controversial as it can be, was welcomed by some members of the community in this instance.

New Zealand has been grappling with a growing methamphetamine problem, with record-breaking busts occurring this year. In some instances, methamphetamine is easier to come across than marijuana due to the disproportionate targeting cannabis has faced with the farcical war on drugs.

The government’s $15 million anti-drug initiative has been questioned, even by drug and alcohol support services.

“I don’t know who is advising the Government because they haven’t gotten it right,” said Stephen King, who runs a drug and alcohol rehabilitation support house service in Waikato. King noted that spending $2 million to identify methamphetamine users entering prison was not an effective use of funds.

It should come as no surprise that even gangs with violent histories are taking the initiative to protect their friends and families from what is seen as an incredibly dangerous substance. The most famous example of the dangers of chronic methamphetamine abuse in the country was Antonie Dixon, who became so paranoid he went on a rampage against his ex-girlfriend and at least two others with a samurai sword in 2003.

Justice was therefore seemingly served in this New Zealand town — without the help of its local police force. A source told Fairfax Media the gang’s threat was successful in removing all of its methamphetamine dealers.

The source said five or six dealers left without a fuss, while the others were given a “hand.”

This article (After Cops Couldn’t Do the Job, This Gang Kicked All the Meth Dealers Out of Town) is free and open source. You have permission to republish this article under a Creative Commons license with attribution to Darius Shahtahmasebi andtheAntiMedia.org.