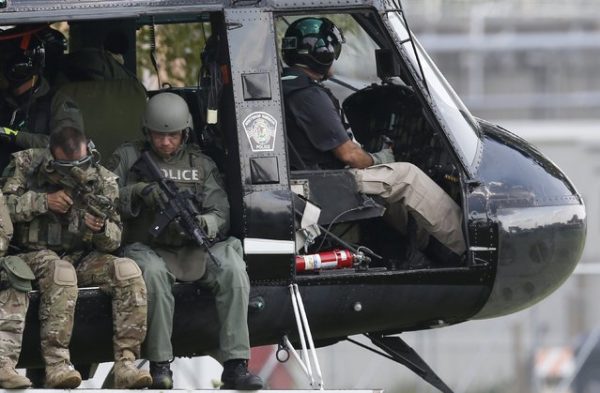 This story sounds very absurd and senseless. The United States government has needlessly crack downed on marijuana users, taking it too far.

The country’s Drug Enforcement Agency (DEA) has continued to display its arrogance, refusing to remove marijuana from the schedule 1 of the Control Substance Act (CSA), despite the overwhelming evidence of the medicinal value of the plant.

This has made some states defy the federal government to make their own marijuana laws. In states where recreational and medicinal marijuana are legal, citizens get the opportunity to use the plant to cure their ailments. However, despite the leverage to use marijuana for medicinal purposes in some states, citizens are still now allowed to cultivate the plant in their homes, no matter how small it is.

It has now emerged that armed police personnel with helicopters, raided the home of an elderly woman in the city of Amherst, Massachusetts, simply because of her single medicinal marijuana plant.

According to local media reports, on Sept. 21, 2016, the Massachusetts National Guard and State Police descended on 81-year-old Margaret Holcomb’s home, using a military-style helicopter to cut down a single marijuana plant that they claim was in plain view.  According to local residents familiar with the home of Holcomb, the plant was hidden away in her fence at the backyard. It is believed the police used a thermal imager to spot the plant, while flying above the area. The police said the raid was part of a broader operation in which they seized 44 plants in the state. According to the police, none of the property owners were charged with anything, just their plants taken and destroyed.

When the news of what the police did in the house of Holcomb was made public, many residents in the state expressed outrage. Holcomb told local reporters she was growing the plant for medical purposes. In fact, she was relying on it to ease her arthritis and glaucoma pain, so that she could sleep at night.

But despite the lax in the law, it is still not easy for residents in the state to grow the plant on their own. Doing so requires a long procedure. The procedure is due to the DEA refusal to remove the plant from schedule 1 of the CSA.

Due to her old age and considering the hurdles involved in the process, Holcomb said she decided to grow the single plant in her house, in order to use it to cure her illness. According to Holcomb, the actions of the police will not deter her from using marijuana. She revealed she has received many goodwill messages from many people because of the incident. Currently, she is even planning to grow a new marijuana plant, no matter the consequences. Many residents in the state have denounced the waste of time and resources by police, using a helicopter to raid a poor elderly woman and preventing her from taking a harmless drug for medical purposes.

Residents said they are just waiting patiently for November, in order to vote massively for the necessary changes to their marijuana laws. Massachusetts is among five states in the United States that will be voting on whether to fully legalize marijuana or not, this November. Also, according to a 2015 Pew Research Center survey, 53% of Americans support the legalization of marijuana because of its medicinal benefits.

This article (Cops Use Helicopter to Raid 81-year-old Woman’s Home, Cut Down Her Single Medical Marijuana Plant) is a free and open source. You have permission to republish this article under a Creative Commons license with attribution to the author and AnonHQ.com.