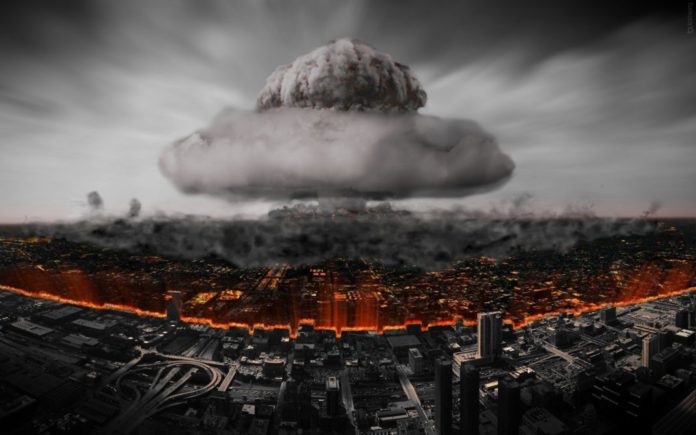 There is no negotiating with megalomaniacs. This is the United States line, digging their heels into the Nevada sands as they test two dummy nuclear bombs in the desert.

These two nuclear bombs were reportedly dropped “earlier this month” from the same U.S. B-2 bombers that were flying over to the South China Sea. If this isn’t stick poking – then what is?

“The primary objective of flight testing is to obtain reliability, accuracy, and performance data under operationally representative conditions. Such testing is part of the qualification process of current alterations and life extension programs for weapon systems. NNSA scientists and engineers use data from these tests in computer simulations developed by Sandia National Laboratories to evaluate the weapon systems’ reliability and to verify that they are functioning as designed.”

They further stated in the press release how the demonstration on the B61 is a “critical element of the U.S. nuclear triad and the extended deterrent,” according to Brig. Gen. Michael Lutton. But failed to explain who is being deterred.

So much for disarmament programs and the U.S. putting their money where their mouth is…can they truly call themselves the peacekeepers now?

Although it can be argued that Russia, this last fortnight, has acted no better, I don’t recall hearing about dummy testing of nukes in Siberia. The United States has taken this one step further – they are the first to act.

I could be wrong, but my guess is if Russia had, NATO wouldn’t be just building up on the borders of the vast country – unless this is aimed at Kim’s North Korea…but unlikely.

While NATO shores up Poland’s eastern flank – and other states – with more troops and western objectives, Russia moved their own deployment into a Kaliningrad outpost. It has its own 500-700-kilometer radius, leaving Berlin wide open for attack. But it is important to note two things here:

What I’m trying to say here is… that it is vitally important to match up the facts and draw your own conclusions. The announcement last week – by the US – that WWIII may be “inevitable,” shortly after their nuclear testing resumed, should never be forgotten over the coming months. Releasing that PR nightmare is akin to a Pandora refusing to return to the box. Was it intentional? Of course it was and corporate media latched onto it like a baby to a pacifier. The question is, why?

It is also very important to note here France’s President Hollande’s comments the other day about Russia, insisting that they are not a threat, but as the Guardian reported, they are seen by the French as a partner.

Russia “has always been open for dialogue [with NATO]”, says Putin’s spokesman, Dimitry Peskov. “Russia is not looking [for an enemy] but it actually sees it happening,” Peskov continued. “When NATO soldiers march along our border and NATO jets fly by, it’s not us who are moving closer to NATO borders.”

The Cold War has unfortunately thawed. It has, unfortunately encompassed China, as well. China and Russia are known allies. Economically, the west cannot beat China. Military-might will also fail. This is not a war that the United States can win.

Napoleon Bonaparte, who failed in his invasion of Russia, once said, as he perhaps peered in the direction of China… “Let China sleep, for when the Dragon awakes, she will shake the world.”

I wonder how he’d feel knowing that these two great nations have now allied together?

It is time for all nations to take a page from the history book and understand, that in a crisis like this, no one can ever win.

This article (United States Drops 2 Dummy Nuclear Bombs in Nevada last Month) is a free and open source. You have permission to republish this article under a Creative Commons license with attribution to the author AnonWatcher and AnonHQ.com.