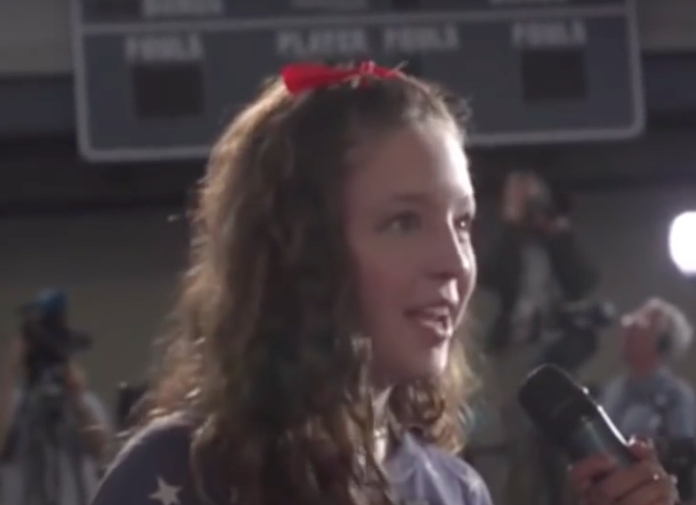 The Clinton presidential campaign has been caught scripting reality, this time at a town hall in Haverford, Pennsylvania. During the town hall meeting, a 15-year-old girl was supposedly “chosen at random” out of the audience to ask Hillary Clinton a question.

The young lady gave a such a well-scripted performance that a suspicious individual on YouTube going by Spanglevision chose to further investigate.

After some online investigative work, it was revealed that the “randomly selected” audience member – who was also the only person with a question written on a prepared script – was child actor Brennan Leach, who just so happens to be the daughter of democratic Pennsylvania state senator Daylin Leach; a Hillary supporter.

Here is the obviously staged “random” question from Brennan to Hillary Clinton:

“Hi Madam Secretary. I’m Brennan and I’m 15 years old. At my school, body image is a really big issue for girls my age. I see with my own eyes the damage Donald Trump does when he talks about women and how they look. As the first female president how would you undo some of that damage and help girls understand that they’re so much more than just what they look like?”

And, this folks, is what life is like in the Matrix; where politicians script questions for little girls and feign that they are random, while knowing full well what question will asked be and having an answer already in the can.

“I’m so proud of you for asking that question. You are right — my opponent has just taken this concern to a new level of difficulty and meanness. And, it’s shocking when women are called names and judged solely on the basis of physical attributes.

“My opponent insulted Miss Universe. I mean, how do you get more acclaimed than that? But, it wasn’t good enough. So we can’t take any of this seriously any more. We need to laugh at it. We need to refute it. We need to ignore it. And we need to stand up to it.”

Of course, the corporate news media, almost as if on a script themselves, plastered the “adorable” young girl and her “brave” question all over the headlines of the 24-hour news cycle. With coverage from New York Times.

In addition, there were stories about it from CNN, The Washington Post, New York Magazine, The Chicago Tribune, and Cosmopolitan.

So in assessing the situation, we have a child actor of a democratic political operative that asks a scripted question, while pretending it’s a “random” audience member’s question, and that interaction just so happens to be picked up by almost every mainstream outlet in the United States. Talk about some great luck, eh?

Brennan’s a veteran political actress as it turns out. Her dad, Daylin Leach, utilized her acting skills during his run for Congress back in 2014 in the video shown below.

The fact that Clinton feels the need to script reality shows how truly out of touch she is with the average person. Her campaign feels the need to place people in the audience to ask scripted and rehearsed questions under the guise of being “random” audience questions.

Even more troubling, perhaps, is the fact that it takes a YouTuber to investigate the “random” girl at the event (isn’t that the media’s job?), and her connections to the Democratic political machine, to discover that the girl was not chosen at random at all — but as part of a scripted narrative.

Add to that the fact that almost every major mainstream media outlet ran with this narrative, as intended by the fraud, and you begin to realize that the corporate media is actually fully complicit in perpetrating a massive fraud on the American public.

Please share this story if you are sick of politicians and the mainstream media trying to insult your intelligence by perpetuating frauds like this on the American public!

This article (Hillary Clinton Campaign Caught Using Child Actor at Town Hall Event — Corporate Media Spreads The Lie Anyway) is free and open source. You have permission to republish this article under a Creative Commons license with attribution to the author and The Free Thought Project.