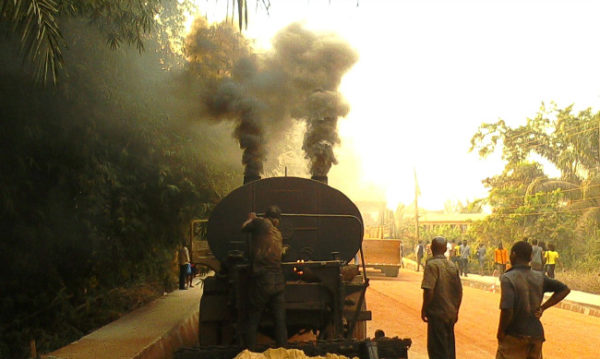 No amount of money can satisfy a corporation. That is why it is important for us to guide against corporations taking over our governments and our countries.

A new report published by a Swiss-based non-governmental organization, Public Eye, has revealed that some major European oil companies and commodity traders are exploiting weak fuel standards in African countries by exporting highly polluted diesel to the continent. According to Public Eye, the fuel being shipped to Africa could never sell at the pumps in Europe. The report explicitly named Swiss commodity traders Trafigura and Vitol, as among a number of companies who are exporting the dangerous fuel to Africa. According to the report, the companies blend products in European facilities to create fuels with sulphur levels that are sometimes hundreds of times over the European limits.

Although not part of the report, Public Eye claimed it has enough evidence to prove that British Petroleum (PB) also exports high-sulphur diesel to Ghana, a country in West Africa.

During the investigation, Public Eye said it realized that blending of fuels with other substances to achieve particular specifications before export, is standard practice among oil companies in Europe. Public Eye stated that due to weak laws in Africa, it allows traders and fuel companies to dump cheap and dirty fuels, particularly by blending them into other diesels before export. This maximizes profits at the expense of Africans’ health. For example, in 2015, Vitol reportedly made a sale of more than $270 billion. The company’s chief executive, Ian Taylor, is said to be a major donor to the British Conservative Party; with the British Queen even offering him a knighthood.

Public Eye took three years to investigate the quality level of diesel on the market, selecting sub-Sahara African nations as part of the study. Public Eye tested diesel sold at the pumps of outlets, which are partly owned by various Swiss trading companies, in eight countries across sub-Saharan Africa. The organization found that more than two thirds of the fuel sampled had sulphur levels of more than 1,500ppm – 150 times the European limit.

The United Nations Environment Programme (UNEP) has been working with African governments to bring the level of sulphur in their fuels down, in order to cut the risk of diseases associated with carbon emissions.  According to experts, when sulphur fuel is burned, sulphur is released into the atmosphere as sulphur dioxide, among other compounds, contributing to respiratory diseases. Health experts say the harm done by sulphur in fuels cannot be estimated in Africa. Dangerous respiratory diseases, such as bronchitis and asthma are linked to these fuels, along with various cancers. Placing this investigation into context, a recent report published by the World Bank and the Institute for Health Metrics and Evaluation revealed that air pollution is the third-biggest cause of death in poor and lower-middle income countries.

It is estimated that air pollution killed more than 17,500 people in Ghana alone, in 2013, costing the country more than $542m in lost labor income. The amount even excludes the costs of treating pollution-related diseases in the country. Trafigura made headlines in 2006, when a ship it chartered, named Probo Koala, dumped toxic waste in the Ivory Coast – also a country in West Africa. It emerged that the company’s lawyers attempted to gag the media from reporting on a draft report into the incident. Trafigura, however, later agreed upon a settlement with up to 30,000 claimants affected by the dumping.

Public Eye said this incident motivated them to carry out the study. The head of Public Eye’s commodities team, Andreas Missbach, explained to the Guardian how the companies have taken Africa for granted, due to weak laws. “Like everyone else, we focused first on the waste, but then we asked ourselves: Why was Trafigura improvising a refining operation aboard a tanker, which created the toxic waste in the first place? It had been done to produce a blendstock, a very highly sulphurous intermediate product to be blended into the gasoline. This high-sulphur gasoline could never have been sold at a pump in Europe, but it was good enough for the African market,” he said.

Director of UNEP, Erik Solheim said the practice exposed by Public Eye is highly unacceptable, and that the companies involved should desist from it.

This article (Corporate Greed: BP, Trafigura and Vitol Export Dirty Oil to Africa to Kill People) is a free and open source. You have permission to republish this article under a Creative Commons license with attribution to the author and AnonHQ.com.