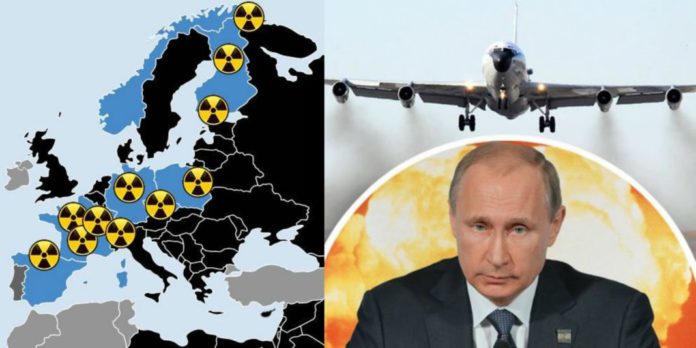 Fears of a secret Russian nuclear test in the Arctic – or an unreported nuclear accident at a Russian nuclear power plant – have been stoked after a spike in the levels of radioactive Iodine-131 was detected in the air across Europe. The mystery deepened when it was reported the United States had deployed its nuclear ‘sniffer’ jet, WC-135 Constant Phoenix, first to the United Kingdom and later to Norway.

Strangely, despite detecting the radioactivity over the Norway-Russia border (close to Russia’s former nuclear testing area in Novaya Zemlya) in January, the Scandinavian authorities hid the news from the public.

After the spike was detected in Finland, Poland, the Czech Republic, Germany, France and Spain, the French Institute for Radiological Protection and Nuclear Safety (IRSN) acknowledged the radioactivity had spread across Europe; it was released very recently, and nobody is sure where it came from.

“Iodine-131, a radionuclide of anthropogenic origin, has recently been detected in tiny amounts in the ground-level atmosphere in Europe. Iodine-131 is a radionuclide with a short half-life (T1/2 = 8.04 day). The detection of this radionuclide is proof of a rather recent release. When asked why Norway didn’t inform the public in January itself, Astrid Liland, head of section for emergency preparedness at the Norwegian Radiation Protection Authority, told The Barents Observer:

“The measurements at Svanhovd in January were very, very low. So were the measurements made in neighbouring countries, like Finland. The levels raise no concern for humans or the environment. Therefore, we believe this had no news value.”

While France’s nuclear safety authority insists the detected levels of radioactive Iodine-131 in Europe’s air raise no health concerns, what’s disturbing is the fact that no one is saying what actually happened. However, since measurements from several places in Europe ‘supposedly’ indicate the radioactivity came from Eastern Europe, British media is quick to blame Russia.

“Conspiracy theorists have pointed to the fact that the spread appeared emanate from northern Norway, where Russia may have run a secret nuclear test. Iodine-131 is perhaps most closely associated with atomic bombs, and was found throughout the world after those were tested, as well as after accidents at the Chernobyl and Fukushima nuclear power plants.”

“Sources suggest the aircraft has been tasked with investigating the spike in radiation levels detected in northern Europe since January. And some respected websites claim there are growing fears within military circles that Russia has been testing its nuclear might ahead of a future conflict.

“Many point to the radiation spike as “proof” the Russians have restarted nuclear weapons testing at Novaya Zemlya near the Arctic. Others point to the lack of recorded seismic activity to cast doubt on the claims. However, the deployment of the WC-135 to the U.K. seems to add weight to the test theory.”

Interestingly, while the U.S. military has yet to release an official statement on the mission of the nuke-hunting plane, The Aviationist reports the WC-135 has been tasked in investigating the spike in Iodine-131 levels in northern Europe since January — due to the U.S. fearing Vladimir Putin has detonated a nuclear weapon.

Radioactive Iodine-131 — used to diagnose and treat abnormal liver function, renal blood flow, urinary tract obstruction, hyperthyroidism, and thyroid cancer — has historical links to United States and Soviet nuclear tests during the 1950s. It has also been found among the radioactive contamination following Japan’s Fukushima reactor meltdown, as well as the Chernobyl accident in 1986.

Could it be a nuclear test, an accident at a Russian nuclear power plant, or simply a pharmaceutical mishap?

Russian experts believe the release of a single specific isotope points to an industrial accident. Alexander Uvarov, a Russian expert on atomic issues, contemplates it might have come from a radio-pharmaceutical plant: “Europe has advanced nuclear medicine and has many such facilities. In 2011, there was a release of Iodine-131 in Hungary, at an institute involved in the production of isotopes for medical purposes.”

Whether radioactive Iodine-131 had leaked from a nuclear reactor, a nuclear-powered vessel, or a medical facility, why has nobody claimed responsibility so far? Why didn’t anyone know of the radioactive leak and why was it kept a secret?

This article (Deadly Radioactive Particles Blanket Europe, Rumors of a Russian Nuclear Test Fly High) is a free and open source. You have permission to republish this article under a Creative Commons license with attribution to the author and AnonHQ.com.