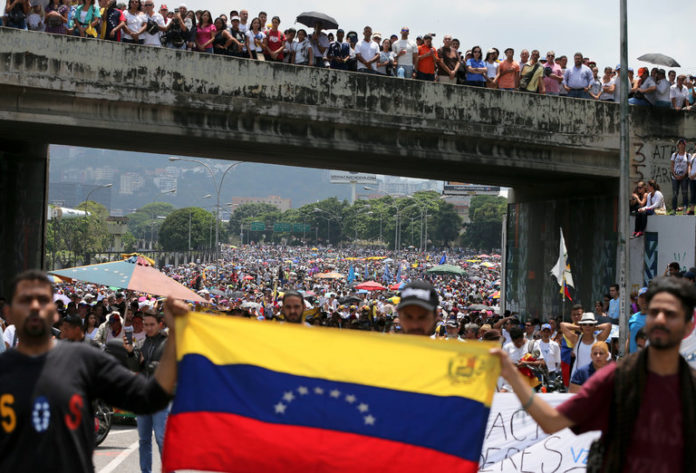 The death toll from the anti-government protests in Venezuela has reached 29 with a 20-year-old demonstrator dying in the latest clashes. Hit with a gas canister, the young student, Juan Pablo Pernalete Llovera, a political accounting student, is the latest victim in the wave of protests that started in early April.

It’s the worst social violence Venezuela has witnessed since 2014. Demonstrators have been protesting for an end to a two-decade long rule by the Socialists, but also against the austere economic crisis that has left many hungry. President Nicolas Maduro has been accused of releasing tyranny against peaceful protesters after seizing dictatorial powers. Maduro, who won the 2013 election with a narrow margin, has postponed local state elections since 2016 and is refusing to support an early presidential election.

Water cannons, tear gas volleys and Venezuelan security forces and National Guard troops gun fire have met with protesters, killing two others this week with gunshot wounds to the stomach and body.

“I want everything to end: the hunger, the murders, the corruption, all the ills we are suffering. We have to stay in the street until there is change. We are the majority,” said one student protesting in a march in the country’s capital, Caracas. However, Maduro’s supporters are likening the event to a violent US-backed coup and calling the protesters “terrorists.”

Protesters are also demanding humanitarian aid as the food and medical shortages hit crisis point. The release of detained political activists has also been demanded.

This week, Maduro’s government confirmed Venezuela will also withdraw from the Organization of American States (OAS), stating the body had infringed on Venezuela’s sovereignty.

OAS members include the United States and 34 other independent states. It was founded in 1948 to achieve “an order of peace and justice, to promote their solidarity, to strengthen their collaboration, and to defend their sovereignty, their territorial integrity, and their independence.” According to reports, no country has ever withdrawn participation from the organization, which Venezuela reportedly owes US $10.5 million. The OAS is not without its critics, however. Protesters in the past have voiced concerns over the widening gap between the world’s rich and poor. The OAS, as part of the international structure that the IMF and WTO belongs to, has been accused of promoting such inequality as free trade expanded. Noam Chomsky was one protester amongst those who offered his support. Maduro is one of the fiercest critics of the OAS; which the organization has accused him of violating human rights and democracy.

The count so far stands at 400 injured, 1,300 detained and 29 dead. The protests show no signs of easing; while Maduro continues to maintain his stronghold on the Venezuelan government.

This article (Death Toll Reaches 29 as Protesters Continue to Clash with Venezuela Govt) is a free and open source. You have permission to republish this article under a Creative Commons license with attribution to the author AnonWatcher and AnonHQ.com.