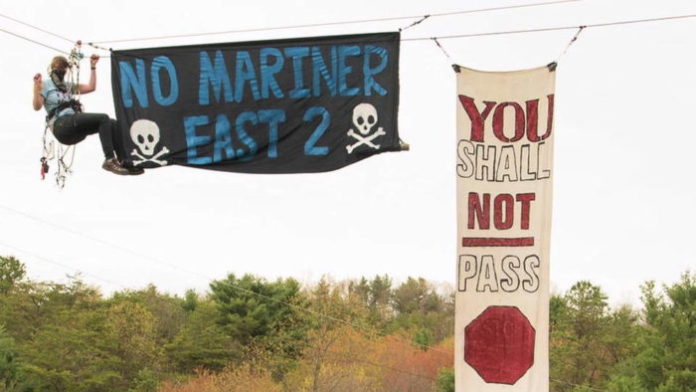 The destruction of the environment for commercial purposes in the U.S. is not only happening in North Dakota; when the U.S. federal government forcefully seized lands belonging to the Standing Rock Sioux Tribe for the construction of the Dakota Access Oil Pipelines (DAPL).

Despite all concerns raised by activists  at the time, concerning the construction of the pipeline, Trump has gone ahead with an executive order for the project to go ahead. The project will destroy nearby environment, including sacred sites of the Standing Rock Tribe. However, as all attention is on the DAPL, elsewhere in the U.S, the natural environment is being destroyed for similar commercial purposes.

Sunoco is an American petroleum and petrochemical manufacturer headquartered in Newtown Square, Pennsylvania. In February, after Trump had taken office, Sunoco was granted permits by state officials in Pennsylvania to begin its controversial construction of the Mariner East 2 natural gas liquids pipeline from southwest Pennsylvania to Marcus Hook, near Philadelphia. The pipeline, once constructed, will carry fracked gas from the Marcellus Shale in Ohio, across Pennsylvania to an export facility on the East Coast.

The 350-mile cross-state project is set to displace many landowners and farmers in Pennsylvania and neighboring state, Ohio. Landowners, together with environmentalists, objected to the project the first day it was announced. According to local sources, the project was announced two years ago. Environmental activists have actually been holding rallies against the project. Especially for protesters in Delaware County in the state, they have questioned Sunoco’s assurances that the pipeline will be safe. In fact, some landowners and farmers have even refused the company’s compensation for building the pipeline on their lands.

Recently, a man named Mike Flaherty and his wife Theresa, who live in the town of Aston, narrated how they confronted what they described as “shady behavior” by Sunoco contractors. The pipeline was to go through their property, but when they asked for information about safety and property values, Sunoco immediately re-directed the pipeline to a neighbor’s property. The reluctance of Sunoco demonstrates the lack of proper safety requirements for the project. The couple were worried that a leak in the pipeline would cause a major disaster on their property and that of others, hence their confrontation with Sunoco.

“My wife and I had questions about safety, environmental concerns, and we don’t think they were answered appropriately. We said, ‘If you’re not willing to answer our questions, we’re not willing to sign your easement’. It felt like it was very high pressure,” Mike told local media StateImpact in an interview about the incident. But of course, if you are dealing with a giant corporation that has the money to bribe officials, it becomes difficult. Mike and his wife only succeeded in not allowing the pipeline to pass through their property. Some people tried in the past to stop the project at the law courts, but they were unsuccessful.

The project has gained momentum in the state. And now that all efforts to stop the construction have failed, activists are using unconventional methods to bring the project to a halt.

At a place known as Camp White Pine in the state, residents and other environmental activists have launched a special operation on trees in order to scare pipeline project contractors. The protesters are actually suspending themselves from trees and are doing this on a 24-hour rotating basis. According to the protesters, their goal is to prevent workers of Sunoco from clearing the natural forest to make way for the pipeline. The unusual protest is said to have attracted many residents in Huntingdon County. Other people from neighboring counties and other areas are joining this last attempt to stop the construction of the pipeline. These concerned protesters are doing their best to protect the environment. But don’t be surprised to hear the government has unleashed terror on them as they did in North Dakota. If they succeed in driving away the workers, like what happened to the Standing Rock Tribe, when armed security officials unleashed batons and dogs on those who were protesting peacefully, these people could face a similar fate. We are following events in the area and will report on the latest.

This article (Residents in Pennsylvania are Sitting in Trees 24/7 to Block Construction of Gas Pipeline [Photos]) is a free and open source. You have permission to republish this article under a Creative Commons license with attribution to the author and AnonHQ.com.