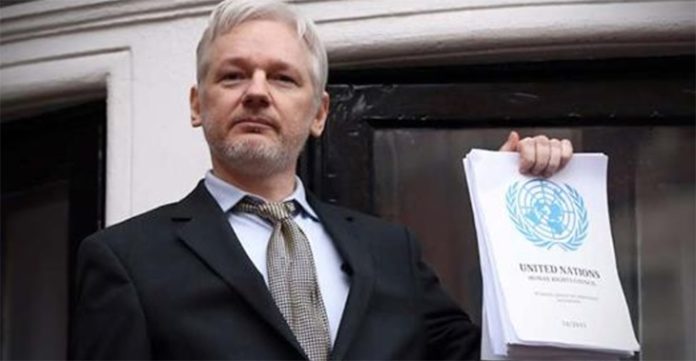 Julian Assange, for the last six years, has been persecuted and held captive because of rape allegations; allegations that we have now found out are entirely fabricated by police.

Today marks the first time that Assange has gone public with his version of events surrounding the rape allegations for which he was arrested in 2010.

“Six years ago today, on 7 December 2010, I was handcuffed and locked in Wandsworth prison by order of a Swedish prosecutor, Marianne Ny,” Assange explains in a testimony released on Wednesday. “I had not and still have not been charged with an offense. The claimed grounds for my arrest and extradition without charge were so that NY could question me. But it was not until six years later – three weeks ago – that I was questioned for the first time. I have decided to release my responses.”

In November, Assange was finally questioned aver a two-day period. However, as Assange points out, “my Swedish lawyer was excluded from the room in yet another breach of my basic rights.”

In a 19-page statement, also released on Wednesday, Assange details the events leading up to his persecution, including being railroaded by the American, Swedish, English and Australian governments.

Not coincidentally, all of these allegations of Assange’s alleged sexual misconduct came after he began exposing the war crimes of the US government, after being leaked information by the heroic Chelsea Manning.

“I… could not believe my eyes when five days later I saw a headline in a Swedish tabloid that I was suspected of a crime and arrested in my absence. I immediately made myself available to Swedish authorities to clarify any questions that might exist, even though I had no obligation to do so.”

In his statement, Assange outlines the details of what he refers to as “consensual and enjoyable” sex with a woman known as ‘SW,’ which he says occurred four or five times.

Assange is accused of having sex with SW while she was asleep which is considered rape under Swedish law. However, on Wednesday, he released SMS messages showing that this did not happen. According to the statement:

Her behavior towards me on the night in question and in the morning made it clear that she actively and enthusiastically wanted me to have sex with her. This is also shown by text messages “SW” sent to her friends during the course of the evening I was at her home and during that week, which the Swedish police collected from her phone. Although the prosecutor has fought for years to prevent me, the public and the courts from seeing them, my lawyers were permitted to see them at the police station and were able to note down a number of them, including:

“Without even bothering to take my statement, the Swedish Prosecution Authority broke its own rules and released my name to a tabloid newspaper,” explains Assange in his testimony. “Prosecutor Ny went on to produce more than 40 press releases and press conferences about me. As a result, to this day more than half a million web pages falsely conflate my name with the word “rape”.

Luckily for Assange, the world is waking up to his mistreatment. Just last week, the United Nations rejected an appeal by the U.K. of a previous ruling as “not admissible,” noting that London and Stockholm must end the ‘arbitrary detention’ of the WikiLeaks founder.

As Claire Bernish pointed out last week, Julian Assange has the unimpeded right to walk away from the Ecuadorian Embassy that has graciously provided asylum to the arbitrarily detained Wikileaks founder without fear of being arrested and taken into custody — at least theoretically.

Without grounds for further appeal, the British and Swedish governments are left without tangible justification for continuing to tacitly force Assange to remain secreted inside his haven in London.

But it remains to be seen what, precisely, will happen next.