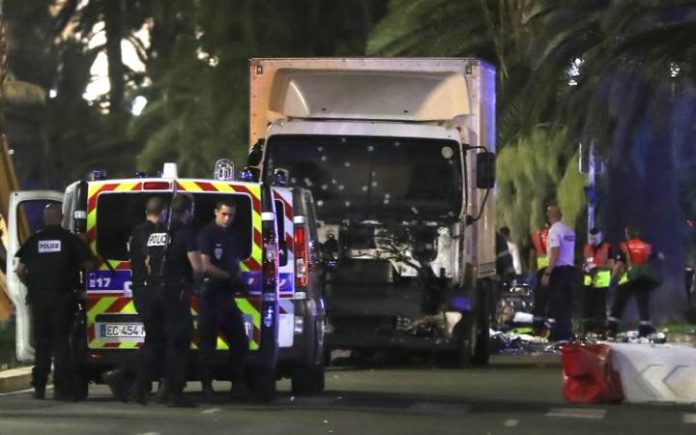 The fear of a new terror attack has risen into the hearts of many as the death toll climbs in Nice. Nice, considered a tourist hotspot in Southern France, has been the target of a single driver of a lorry, who careened his vehicle into the crowds celebrating Bastille Day, killing at least 80 and injuring 100 others, 18 of which now been reported as critical.It has yet to be confirmed if this was the work of ISIS or a lone wolf. Gunshots were reportedly fired at the driver by police, in attempts to stop the truck driving at 60-70 km per hour before finally hitting the thick crowds watching fireworks at around 30km. It has been reported that the driver did get out of the vehicle to begin shooting at the crowds on the seafront Promenade des Anglais. According to the Telegraph UK and many eyewitness accounts, the police told the crowds to “run” as fears mounted that several gunmen were walking the streets armed and potentially targeting hotels. This report has yet to be confirmed. However, reports of a second accomplice, who fled the scene, have been confirmed, and reports of grenades and guns found in the lorry are now being announced. President François Hollande, who was Avignon at the time has cut short his visit to south region to return to Paris to chair a crisis meeting.

The French have been on the highest alert since 2015, when the Paris attacks claimed 130 lives and injured many others.


Update:  Al Jazeera have reported that identity papers have been discovered inside the lorry used, belonging to a 31-year-old French-Tunisian. President François Hollande has now acknowledged that this is an act of terrorism.

“Nothing will make us yield in our will to fight terrorism. We will further strengthen our actions in Iraq and in Syria. We will continue striking those who attack us on our own soil,” President Hollande stated.

This article (Death Toll Rises to 80 in Nice ‘Terror’ Attacks after Truck Crashes into Bastille Crowds. Injures 100 More) is a free and open source. You have permission to republish this article under a Creative Commons license with attribution to the author and AnonHQ.com.