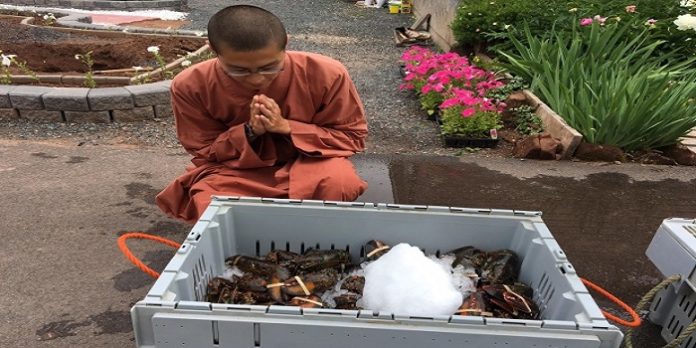 To promote the idea of respecting all creatures on Earth, Canadian monks rescued over 600 pounds of lobsters and released them into the sea.

On Saturday, compassionate monks from the Great Enlightenment Buddhist Institute Society on Price Edward Island scoured markets to find as many lobsters as possible. According to Independent.co.uk, the monks were on a mission to demonstrate the ease in which a collective group might “cultivate compassion” on Earth.

After acquiring approximately 270 kg (600 pounds) of lobsters, they then proceeded to hold a 20-minute prayer and chant to the Buddha of compassion, then released the crustaceans into the sea.

Their liberation project might seem weird to the average individual, but it’s an effort that has been positively received by most of the community. In fact, fishermen have helped the monks find better locations to release the lobsters so they won’t be captured again.

Venerable Dan, a spokeman for the monks involved, told the press that the mission wasn’t just for the lobsters, but for all humans.

“This whole purpose for us is to cultivate this compassion toward others. It doesn’t have to be lobsters, it can be worms, flies, any animals, drive slower so we don’t run over little critters on the street.”

“Hopefully, we can find a spot where there are no cages waiting for them,” he added.

Though the holy men adhere to a cruelty-free diet, they had no intention of pushing dietary dogma on the public. Said Dan:

“We respect everyone’s dietary choice, so we’re not doing this to convert everybody to be vegetarians or vegans.”

The monk likened the compassionate effort to helping out a friend or relative. He asked:

“If your loved ones were in this situation, what would they like you to do? To give them a helping hand and put them back to where they feel comfortable and we believe if everybody’s able to do that, it will become a better place, a more harmonic place.”

The takeaway, he said, is that one doesn’t have to have a ceremony or be a Buddhist to practice compassion. In addition, it’s easy to be nicer to all living beings when you try to think from their point of view.

This article (Monks Purchase Hundreds Of Live Lobsters And Release Them To The Ocean) is free and open source. You have permission to republish this article under a Creative Commons license with attribution to the author and TrueActivist.com