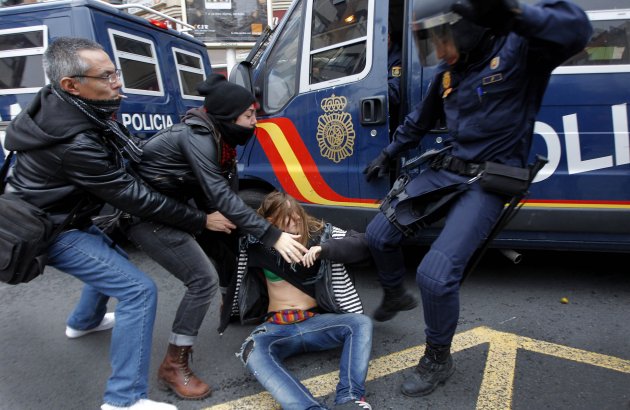 Spain Tortures. Amnesty International backs this claim with facts, figures and prisoners’ horrible experiences that will truly shock you.

In the last 10 years, the Committee for the Prevention of Torture has collected 6,621 complaints of torture committed by the Spain police. The figure contrasts with the low number of convictions handed down by the courts – 752 to be precise.

“The practice of torture is an everyday reality in Spain. Day after day we receive information from people who have suffered all kinds of abuse and torture from stress positions, to push-ups, rape or physical assault,” complains Jorge del Cura, spokesman for the Committee for the Prevention of Torture.

According to Pau Perez, adviser to the National Mechanism for Prevention of Torture and expert in national and international courts for victims of abuse and torture, every police force in Spain has elite units formed for to torture. “The intimidating torture of immigrants, the torture of militant social movements is physical but plays more with fear, threats, and terror. Fear of pain is more devastating than the pain,” feels Perez. Mikel Soto, who was arrested with his partner for attempted collaboration with an armed gang, has a painful experience to share: “I suffered quite serious torture by the unit in charge of conducting it. They were professionals. They didn’t seem like a gang of fools. They knew what they were doing. It is difficult to explain the torture I suffered. I counted the blows they gave me in the back of the head, the physical exertion, the gun that they in my mouth … but it’s difficult to explain everything that happened at the time. You have a gun in your mouth, while one policeman steps on your heels and another insults you”.

Allegations of torture happen outside of environments of police station detention: 50% of them occurred against activists of social movements, nearly 40% against immigrants and only 10% were related to the conflict in the Basque Country.

Victor Madrigal, secretary general of the International Council for the Rehabilitation of Torture Victims, takes note: “I find it hard to believe that in Spain there is no center because there are no torture victims. I think it has more to do with a lack of recognition of the rights of those victims. With the documentation provided by Amnesty International and the Committee for the Prevention of Torture, I am inclined to think that in Spain, there is a problem that should be recognized, both from the courts and from the public authorities. Only a State which investigates allegations of torture can be called truly democratic diligently”.