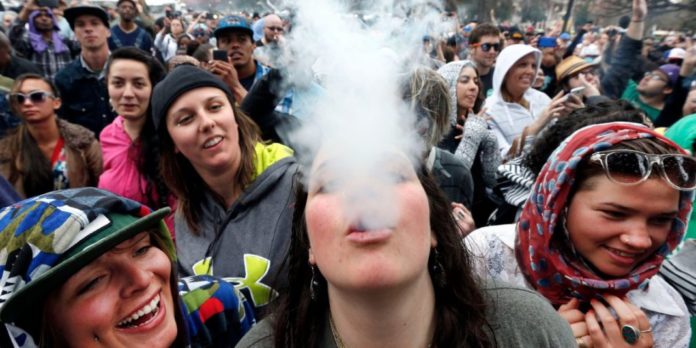 Denver, the capital of Colorado, has become the first city in the United States to permit the use of marijuana alongside a meal or a cocktail in bars, restaurants, and other eateries. Recreational marijuana use inside private residences has been legal in Denver since 2014; with the new law, adults can use marijuana in a social context as well. Emmett Reistroffer, a Denver marijuana consultant and campaign manager for the pot-in-bars initiative, noted:

“It’s the sensible thing to do. This is about personal responsibility and respecting adults who want to have a place to enjoy cannabis.”

Voters in Denver approved Initiative 300 — a measure that would create a four-year pilot program to allow businesses, from bars and cafes to yoga studios, to seek permits to establish “bring-your-own marijuana indoor (allowing vaping and edibles, but not smoking) or outdoor (allowing smoking) consumption areas” for adults — on the same day California, Massachusetts and Nevada legalized marijuana for recreational purposes. Mason Tvert, a marijuana activist, observed:

“The measure would reduce instances of tourists smoking pot on sidewalks and in parks because they have nowhere private to consume weed. The initiative helps not just tourists but adults who may not want to use pot in front of their kids, or tenants whose landlords exercise their right to ban pot use. The entire goal of this initiative is to provide adults with private places where they can consume cannabis so they’re not consuming in public.”

Marijuana Bars: Coming soon to Denver and probably the rest of the country. https://t.co/5GKdZzQEm1 pic.twitter.com/7pYy3NSvm7

Social marijuana is legalized in Denver until 2020, unless city officials renew the licenses or voters make the pot-in-bars measure permanent. Lead backer Kayvan Khalatbari, co-owner of Denver Relief Consulting, said in a statement:

“We are truly grateful to the people of Denver for approving this sensible measure to allow social cannabis use in the city. This is a victory for cannabis consumers who, like alcohol consumers, simply want the option to enjoy cannabis in social settings. This is a victory for the city of Denver, its diverse neighborhoods and those who don’t consume cannabis, as it will reduce the likelihood that adults will resort to consuming in public.”

However, the measure has a lot of caveats. To get a permit, interested bars and restaurants must obtain approval from a single local neighborhood or business group, such as a city-registered neighborhood organization or business improvement district.

Since Colorado state law prohibits on-site consumption at marijuana shops, the permit does not allow bars and restaurants to sell marijuana products. Thus, the patrons would have to bring their own weed to smoke in specified outdoor areas; although, they are permitted to use weed inside the eateries as long as it isn’t smoked.

The proposition requires willing bars and restaurants to train their staff in the use of marijuana and also to submit an elaborate operations plan that shows how they will prevent the use of cannabis by underage customers. The establishments are also expected to set up strategies and procedures for identifying over-intoxicated customers and how they will respond to consumers who are intoxicated.

While Initiative 300 gives marijuana consumers a place to consume marijuana, just like alcohol consumers, opponents fear that bars and restaurants could face resistance to seeking consumption area permits from their insurers. However, Rachel O’Bryan, campaign manager for Protect Denver’s Atmosphere, speculates that if businesses near residential areas and along the 16th Street Mall would seek permits, it would affect their neighbors negatively. She told The Denver Post:

“Our belief is that this will not fix the problem in the city with open and public marijuana smoking. This will only spread it throughout the city because the businesses are anywhere. The rooftops could be in any neighborhood.”

The Liquor Enforcement Division of the Colorado Department of Revenue announced a new regulation, which, starting January 1, would keep bars and other businesses that serve alcohol from applying for new social marijuana use permits for on-site marijuana consumption areas, as required by Initiative 300.

Though Tvert felt that there are still plenty of other business types that will be able to have social marijuana consumption permits, he appeared shocked that the decision was taken over by the concerns about the public dual consumption of marijuana and alcohol:

“It is astonishing that the Department of Revenue is so openly fighting a turf battle on behalf of the liquor industry. They seem to think it’s fine for patrons of bars and concert venues to get blackout drunk, but unacceptable for them to use a far less harmful substance like marijuana instead.”

This article (Denver Approves First-In-The-Nation Law to Allow Marijuana Use in Bars, Eateries) is a free and open source. You have permission to republish this article under a Creative Commons license with attribution to the author and AnonHQ.com.