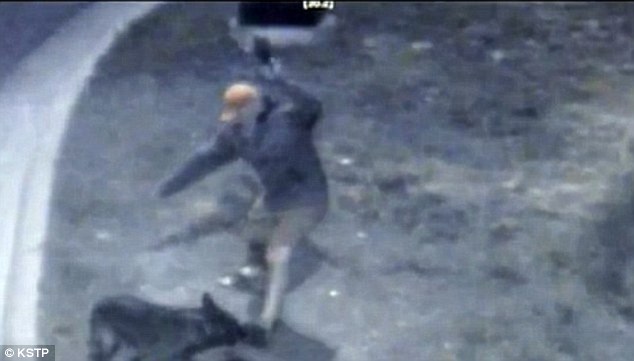 A Minnesota deputy was caught on surveillance cam, protecting and serving the shit out of his K9 partner, Boone. In a typical show of the thin blue line, despite being charged with animal cruelty and convicted, the deputy gets to keep his job. Ramsey County deputy Brett Berry was seen viciously attacking his K9 partner in a surveillance video, was arrested and charged and convicted. Little of this meant anything to his employers at Ramsey County Sheriff’s Office. Even though Berry pleaded guilty to a charge of animal cruelty, he was allowed to keep his law enforcement certification and his job. Police repeatedly send the public the message that they don’t care about truth and justice, rather, they care about protecting their own, despite the costs.

A Facebook page was created, seeking justice for K9 Boone and demanding that Berry be fired. “So sad, they could have done the right thing and send a clear cut message to the public and law enforcement alike , we don’t care who who you are, animal abuse is crime no matter who you are. Pretty much knew the outcome already because you have a sympathetic County Attorney, who himself has had alcohol problems and arrests. Sad sad day,” one post read. The sentiment was the same throughout the post, of concerned citizens outraged by this travesty.

Berry stated that he was “blackout drunk” at the time of the incident. The incident occurred ironically enough, at the hotel where Berry and his K9 were staying while completing the K9 certification. When the deputy was asked if he had an excuse, he simply said “no.” He was also initially charged with assaulting a public safety officer. A charge, which recently, landed a black man in prison for 45 years. But if you’re a cop, it seems to be okay. That particular charge was dropped when Berry took a plea deal; involved him remaining on probation for twelve months. A deputy sheriff on Minnesota will be carrying a gun and walking around with a new K9 partner, all while on state supervised probation. Let that sink in for a moment.

“’If striking a dog while you are drunk, which is not OK, is the worst thing that any human being does in their lifetime, then you’ve led a pretty good life,’ stated Berry’s lawyer to the media. “I would challenge all the people who want to vilify him into being worse than a first-degree murderer to stand up and tell me that they have never done anything in their lifetime that egregious.” It’s a lawyer’s job to make their client appear in the best light. It is not however, the role of the top law enforcement official in the county to do the same. It is the Sheriff’s job to ensure that the laws and standards of a civilized society are enforced. This is just another example of how the thin blue line is alive and well, regardless of where you look.

This article (Deputy Caught Beating K9 Partner Convicted of Animal Abuse – Gets to Keep His Job) is a free and open source. You have permission to republish this article under a Creative Commons license with attribution to the author and AnonHQ.com.