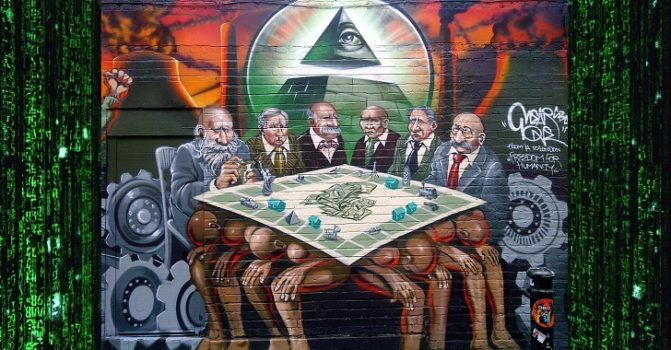 Wait, some conspiracy theories might not be right? Say it ain’t so! For years, the tin foil haters of Youtube and the like have told us about how Obama was going to declare martial law; declare himself dictator over the country, how there is a secret international shadow government working behind the scenes to silently enslave humanity, and how organizations like FEMA and the United Nations would kill hundreds of millions of people to assume regional control over the world to declare a one world government.

Are you afraid yet? Don’t be, because looking at the current state of affairs across the world, it appears the concept of globalism is falling flat on its face. My first examples address the state of the United Nations, in terms of how it is viewed on a global level.

It is often said by the conspiracy community that the Rockefeller’s founded the United Nations, so that one day it could govern the entire world. While the UN is a global peacekeeping force with hundreds of thousands of officials stationed around the world, they do not have any real power.

For example, right now the South Sudan – the youngest country on Earth – is on the brink of War, and the United Nations has been summoned to quell the situation. However, after stationing 12,000 international “peacekeeping troops” in the country, South Sudan’s President has ordered them to stop increasing their forces and leave, warning that the UN troops are trying to assume control of the country.

Days after this, female aid workers and staff serving in the country were violently gang raped by South Sudanese government soldiers at the hotels they were quartered at. It was reported that the UN base was located just 1/4 mile away from the hotel and received numerous distress calls to rescue the women, but never responded – fearing further retaliation from the South Sudanese military.

More recently that that, after the UN criticized President Duterte of the Philippines,  Duterte called them “stupid” and said maybe it was time for the country to separate from its UN relationship.

How about this as another example: Despite ongoing investigations into war crimes committed in Gaza, “Israel has announced it will allow the International Criminal Court its first ever visit to the country,” reported Middle East Eye.

The UN was the legislative body that founded the country of Israel, but the UN is not even allowed inside anymore…and the UN still claims to have any international authority?

There was no intention to turn this into a roast of the UN; I respect many of the things they do around the world. They are admirable, even if they are not the most influential. My point was to speak about the broader concept – that if globalism was to succeed, surely the UN would be a driving force behind this.

Conspiracy theorists always talk about a one world government being driven by the Rockefellars and the United Nations, but the truth of the matter is, the UN is not even close to assuming control over anywhere, anytime soon. Some could even argue the UN could use more permission and authority in our modern, never-mind fear the taking over the globe.

Globalism is often tied to progressivism, which is tied to liberalism. Despite the popularity of Clinton and Merkel in their respective countries, globalism as a whole seems to be in harsh decline compared to conservatism. I look no further than all of this harsh political rhetoric surrounding migrants and borders and nationalism.

It is not just Trump in the United States threatening to pave a way – deport tens of millions of people and ban an entire religions –  it is happening all over the world. Not only that, more and more citizens are getting behind it. 40% of Americans now support Trump’s border wall and the number of people who want to close their borders in the EU is around the same.

Also happening around the world related to the migrant crisis, in a turn for conservative – nationalist – policies, Kenya will be closing the world’s largest refugee camp later this year, in response to a large spike in crime and extremism growing in the region.

Everyone is aware by now that Tony Blair lost his referendum vote on exiting from the European Union, not to mention how his conservative rivals forced his resignation from office. What was surprising about this was the abrupt shift of political power in the country. Britain went from the leader of the most progressive union of countries in the world to the poster child for discrimination and nationalism, literally, overnight.

What is funny about the situation was that the conservative leadership in Britain was spearheaded, in part, by a Donald Trump mini-me. Seriously, check it out: Is Boris Johnson not the ugly clone of Donald Trump? To make things even weirder, they both spout the same conservative rhetoric about their countries, rising to power doing so – at nearly the same time.

Johnson and Britain are not alone in their fight though. Earlier this month, popular French conservative Marine Le Penn has promised that if elected, she will also exit France from the European Union. You may remember her famous anti-immigration and politically conservative father, who once stated that “France belongs to the French” – Implying that only French natives have rights in France, the others should be removed or imprisoned.

The immigration crisis in Europe is widely known at this point in time, so there is no point in summarizing it once again, but something I would like to point out, is the violent clashes happening along European borders, such as with Macedonia.

“For the first time in my life I saw my colleagues crying” Photographer at #Macedonia border. http://t.co/6aonNW3SDa pic.twitter.com/CtDZfb9DfE

Countries the world over are not only strengthening and securing their borders, but they are actively deploying military assets to do so. Here, in the United States, we are always in a state of constant Trump overload with the main stream media, but something I find interesting is the unique level of international criticism the United States receives for something it has not even done yet – close their borders and build border walls – while dozens of other countries are actually doing this as I write.

As if that isn’t enough, a new poll was released in September showing how Elizabeth Merkel was loosing in the national polls to an anti-immigration opponent for the first time. You may or may not know that Merkel won the person of the year award in 2016, largely for her role in negotiating international disputes. At the same time, Germany is also emerging as a world leader in refugee outreach – accepting over 92% of all immigrants who apply.

While this is the admirable thing to do, the stress load of so many immigrants into the the German culture seems to be reaching a breaking point. There have been several anti-immigration protests in Germany this year, and although Merkel has stated she has no plans to change her immigration policy, if the polls keep up this direction, she may very well have to heed to the citizens.

My last argument against the death of globalism as a popular “progressive” concept, is the fact that so many people have reacted so negatively to the Soros hack. I have heard many people speak out in favor of globalism as the future of humanity, but I have not heard one person defend the actions of Clinton and Soros – who are actively working to make globalism happen – perhaps more than anyone else on this planet.

I think, for many people, the concept of globalism seems appealing until they actually break it down for what it is – such as with the Clinton and Soros leaks. While it was popular for a long time to believe that globalism and some sort of global community was the next stage of human evolution, if recent news is any indication, this wont be happening for a very long time. As 2016 continues to teach; segregation, nationalism and divisiveness appear to the policies of the future – at least in the very near future.

This article (Despite an Increase in Conspiracy Theories, it Appears Globalism is Dying) is a free and open source. You have permission to republish this article using a creative commons license with attribution to the author and AnonHQ. Join the conversations at www.anonboards.com.