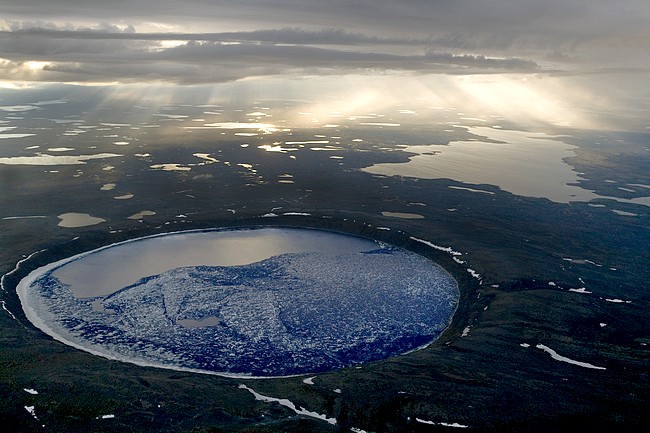 A joint team of scientists from the University of Texas and Imperial College London are set to begin drilling this week on the nearly 112 mile wide impact crater long thought to have caused the extinction of the dinosaurs some 65.5 million years ago. The program is funded by the European Consortium for Oceanic Research Drilling as part of their International Ocean Discovery Programs with the primary goals of investigating:

To accomplish their mission researchers are enlisting the help of 137 foot long boat known as the Liftboat Myrtle. Once positioned over the offshore crater the team will place spuds into the ocean floor and deploy a 6 foot wide tripod based mechanism which will drill into the sea bed below. The researches intend to collect a wide range of core samples taken from varying depths before ultimately stopping at a depth of 1,500 meters (5,000 feet). The first samples wont be taken until the team reaches a depth of 500 meters.

The primary focus of the operation is geological, to study how craters of such magnitude form and re-shuffle the material around them upon impact. The geologists note that this particular crater is one of the best preserved craters in existence and they hope its study can shed some light about how lager craters from on other celestial bodies such as planets and moons. The secondary focus of the operation is biological and in many ways may yield much more interesting results. Biologically speaking researchers hope to find evidence as to how extinction level events impact life forms present at the time as well as how life evolves/develops in the immediate aftermath of such events. As one of the leaders of the project Sean Gulick explains, they hope to answer “how did life come back at ground zero? Was it the specialists that came back first, the generalists? Is there any clue to what organisms repopulated first, as opposed to what the environmental consequences were for the ocean?”

Drilling back to a time nearly 65 million years ago is also extremely relevant to our modern times as this was the last time in which carbon dioxide levels were as high as we currently observe them. So the third focus of the operation serves to explore how elevated levels of carbon dioxide influenced life forms of that time. As Mr. Gulick goes on to explain “Most things just didn’t worry about the high CO2 time, and kind of made it through, however, if you look today, at our current increasing CO2 values, already it’s looking like we have a pretty big extinction event in the making. Is that something to do with vulnerability? Is that something to do with the specific kill mechanisms? We should understand this better, given that we’re kind of in the middle of an experiment, ourselves.”

Drilling began last week April 5th and the first core samples are due to be collected for analysis sometime this week. The expedition is expected to last 6 weeks before wrapping up around June 6th with an expected operational cost of nearly 10 million dollars.

This article (Drilling Begins Inside Extinction Crater Which Killed Off The Dinosaurs) is free and open source. You have permission to republish this article using a creative commons license with attribution to the author and AnonHQ. Join the conversations at www.anonboards.com