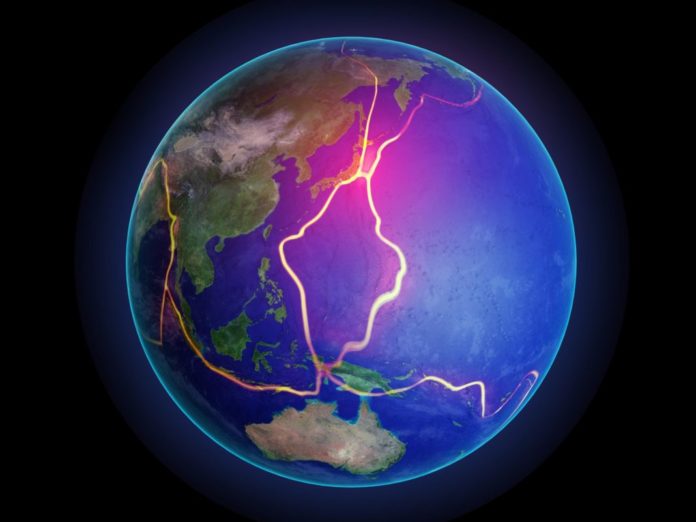 A team of 11 geologists from New Zealand and Australia have discovered the world’s eighth continent 94% submerged in the southwest Pacific Ocean. At 4.9 million square kilometers of landmass, the world’s smallest continent — nicknamed Zealandia — is the youngest, thinnest, and the most submerged continent in the world. Its crust thickness is between 10 kilometers and 30 kilometers, increasing to 40 kilometers under parts of New Zealand’s South Island.

According to the research published in the Geological Society of America’s journal GSA Today, Zealandia is about two thirds of neighboring Australia, which makes it the seventh largest geological continent. Apparently, Zealandia, which is approximately the area of greater India, was a former part of the Gondwana supercontinent (like India, Australia, Antarctica, Africa, and South America) that sank 100 million years ago.

Previously, researchers had thought of Zealandia as a motley collage of continental crust fragments. Others, including National Geographic, defined Zealandia as a micro continent: a well-defined landmass that checks the geologic box of continental crust but is geologically disconnected from the nearest continent — in this case, Australia. But lead author Nick Mortimer, who heads a team of eight geologists at GNS Science, begs to differ:

“Being >1 Mkm2 in area, and bounded by well-defined geologic and geographic limits, Zealandia is, by our definition, large enough to be termed a continent. At 4.9 Mkm2, Zealandia is substantially bigger than any features termed micro continents and continental fragments, ~12× the area of Mauritia and ~6× the area of Madagascar. It is also substantially larger than the area of the largest intraoceanic large igneous province, the Ontong Java Plateau (1.9 Mkm2).”

The geologists, who concluded that New Zealand and New Caledonia aren’t just island chains but are part of a 4.9-million-square kilometer region separate from Australia, had been researching various lines of geological and geophysical evidence to make the case for Zealandia — that it is not a collection of partly submerged continental fragments but a coherent 4.9 Mkm2 continent — for more than two decades.

The name Zealandia was coined by geophysicist Bruce Luyendyk in 1995 as a collective name for New Zealand, the Chatham Rise, Campbell Plateau and Lord Howe Rise. Calling Zealandia a “realization” rather than a “discovery” as New Zealand has been considered a continent in its own right by some experts in the field for years, Mortimer wrote in the paper titled Zealandia: Earth’s Hidden Continent:

“This is not a sudden discovery but a gradual realization; as recently as 10 years ago we would not have had the accumulated data or confidence in interpretation to write this paper. Since it was first proposed by Luyendyk (1995), the use of the name Zealandia for a southwest Pacific continent has had moderate uptake.

“The scientific value of classifying Zealandia as a continent is much more than just an extra name on a list. That a continent can be so submerged yet unfragmented makes it a useful and thought-provoking geodynamic end member in exploring the cohesion and breakup of continental crust.”

There is no official body that recognizes new continents, but the geologists believe Zealandia has all the key attributes (elevation, geology, crustal structure, and limits and area) necessary to be considered a continent. The four attributes similar to the seven continents (Africa, Antarctica, Australia, North America, South America, Europe and Asia) we are familiar with include:

So what does the discovery of a long-hidden continent mean for the humans who live on top of Zealandia? The Sydney Morning Herald observes:

“The political and economic implications of a new continent would be manifold, with the question of clearly defining what belongs to New Zealand and Australia particularly salient in light of offshore mining in the area. A six-year study by the GNS Science research institute in New Zealand has revealed that tens of billions of dollars worth of fossil fuels could be located off-shore in the region.“

Welcome to Zealandia. Inside this fence is an ancient world where devastated New Zealand species can thrive again https://t.co/iw6Bo2Wu80 pic.twitter.com/p296ixECCQ

“Calling Zealandia a continent is more of a formality and mostly a scientific interest. In terms of the economic benefits like minerals, oil, and gas, that was established a while ago. For now, it’s a technology and people-power issue. This is an extreme frontier.”

This article (Forget NASA’s 7 Planets, Earth’s 8th Continent Discovered Off the Coast of Australia) is a free and open source. You have permission to republish this article under a Creative Commons license with attribution to the author and AnonHQ.com.