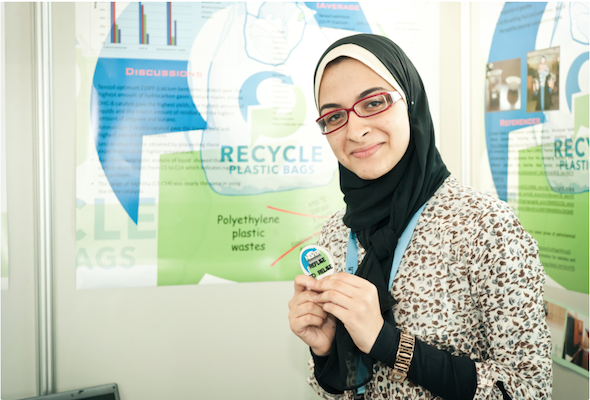 At 16, Azza Abdel Hamid Faiad, a teenager from the Zahran Language School in Alexandria, won the European Fusion Development Agreement award for inventing a cost-effective way to turn a million tons of plastic trash that Egypt produces every year, into biofuel worth $78 million.

Impressed with Faiad’s trash-to-fuel formula to address the country’s plastic woes, the Egyptian Petroleum Research Institute gave her access to a specialized laboratory and a highly technical research team. During her research, Faiad worked on a plastic conversion agent and found an inexpensive catalyst called aluminosilicate, which drastically reduces the cost of converting the plastic trash into gases like methane, propane and ethane. These gases can then be converted into ethanol, a biofuel. The by-product of the process releases other chemicals that can also be recycled and sold.

Nourwanda Sorour, one of Faiad’s mentors and a student at Egypt’s Alexandria University, comments:

“Plastic waste is a real problem in Egypt — and in most developing countries — and this project is simply converting the problem into a solution. The project can be safely implemented — as it doesn’t emit any toxic gases — as long as its implementation abides by the safety measures applied for similar projects.”

Faiad calculates that her discovery could inexpensively generate about 40,000 tons of cracked naphtha and 138,000 tons of hydrocarbon gases per year — equivalent to $78 million.

“Breaking down plastic and polymers by heating them to higher temperatures is not a new idea, but the type of catalyst used is what gives the idea its strength… I will pursue my efforts to get my project patented this year through the Egyptian Patent Office and also to see the idea become a tangible project on the ground.”

Faiad’s ingenious invention for generating biofuel by breaking down plastics and using a low-cost catalyst has global implications (the United States alone produces 31 times more plastic than Egypt), considering the fact that some 299 million tons of plastics were produced in 2013, and that there will be more plastic in our oceans than fish by 2050. Just imagine, if Faiad’s idea is replicated around world, the numbers will be staggering.

This article (Egyptian Girl Discovers How to Turn Plastic Trash into $78 Million Biofuel) is a free and open source. You have permission to republish this article under a Creative Commons license with attribution to the author and AnonHQ.com.