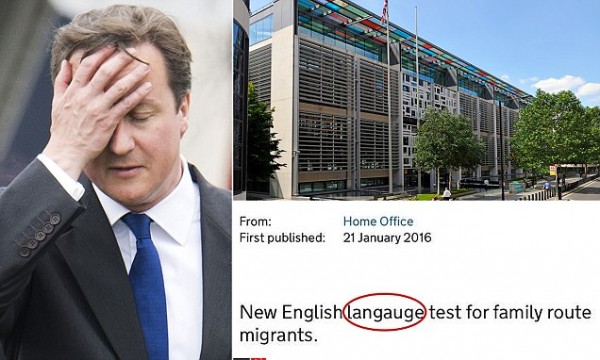 The Home Office of the United Kingdom (UK) spelt the word ‘language’ wrong when announcing a new tough English test for migrants in the country.

Mr Cameron said all those who entered the UK on the five-year spousal settlement programme, would have to sit language tests after spending two and a half years in the country.

Furthermore, non-European partners, parents of British citizens, and people who have settled in the UK will need to pass a speaking and listening test at “level A2” in order to qualify and remain on a five-year partner or parent route to settlement. From what we gathered, those who fail in this new test will likely be deported to their home countries. However, in announcing this new rule to non-native speakers of the language, the official website of the Home Office wrote in the banner headline: “New English langauge test for family route migrants.”

After the error was published, many people took to Twitter to ridicule the Home Office for failing to spell the word correctly, especially when the Office is compelling non-native speakers to speak the language correctly.

BBC Radio 4 presenter, Anita Anand wrote on Twitter: “Beyond parody – Home Office can’t spell ‘language’ in their note to migrants who have been told to learn English.”

One important question was also asked by Neil Ainger: “If migrants fail this they risk deportation. So who exactly from the Home Office are we deporting? “

Some also said the Prime Minister and his team are incompetent, and that the test policy should not be implemented since officials at the Home Office cannot even spell a simple word correctly.

The Prime Minister’s official spokeswoman responded by stating, “I think all of us are open to mistakes at times. The Prime Minister is pretty confident that his team speaks English competently.”

The embarrassing error was subsequently corrected by officials of the Home Office. A Home Office spokesman said, “This was a regrettable typographical error that has now been corrected.” The UK’s Home Office is the government department responsible for immigration, counter-terrorism, police, drugs policy, and related science and research. Meanwhile, David Cameron has faced intense criticism for saying that Muslim wives will be removed from the UK if they do not learn English. Critics said the new test is a product of the government’s determination to remove Muslim migrants from the UK. The Prime Minister had announced a £20m fund to teach Muslim women in the UK to speak English, claiming it would help tackle segregation and help them resist the lure of extremism. In the past, critics have said that Mr Cameron and his government are trying to introduce racist immigration controls in the UK in order to deter people, especially Muslims, from migrating to the country.

This Article (Embarrassing: UK’s Home Office Spells ‘Language’ Wrong On New English Test For Migrants) is free and open source. You have permission to republish this article under a Creative Commons license with attribution to the author and AnonHQ.com