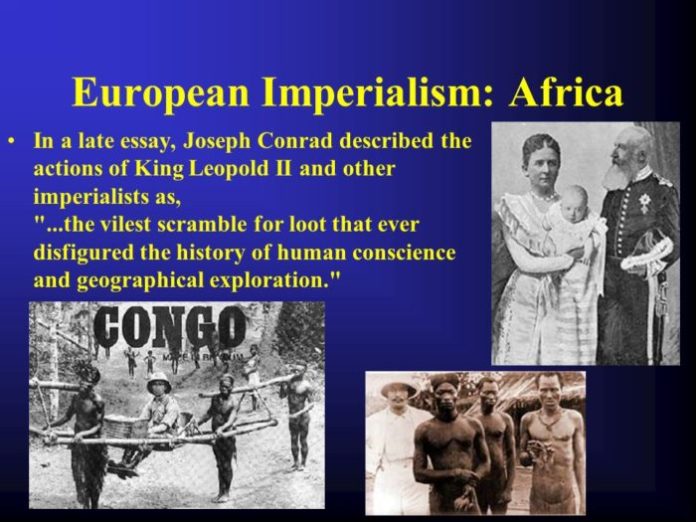 The relationship between Africa and Europe has been, and still is, exploitation against Africa. From the 15th through to the 19th centuries, the Trans-Atlantic Slave Trade flourished.

According to the Trans-Atlantic Slave Trade Database, 12.5 million people were taken from Africa and made slaves in the New World (the Americas). During this period, European powers had annexed colonies in the New World, establishing huge plantations. The slaves primarily worked in these plantations to cultivate raw materials to feed European industries. Many atrocities happened during the period, notably among them, the worst genocide ever committed in human history. King Leopold II of Belgium carved out a large area in Central Africa, naming it the Congo Free State. The area, which was many times larger than Belgium, became the personal property of King Leopold II. The King used the area for plantations. He then implemented a force labor policy, ensuring that the population produced rubber and other raw materials to enrich Belgium. Over 10 million Africans living in the Congo Free State died from the force labor policy of Leopold II.

As slavery ended, Europeans quickly changed tactics. They divided Africa among themselves at the Berlin Conference, ensuring their continuity to maintain the African exploitation. During the colonial days, Europeans took raw materials free of charge from Africa, to the extent that nobody today can estimate the amount of wealth the Europeans claimed from the continent of Africa.

But in the 1950s, when African nationalists stood up to Europeans and demanded the freedom to rule themselves, Europeans had no choice than to give up. The Second World War had badly affected Europe, but even as Europeans exited Africa, they still maintained the economic dominance over the places they once ruled. The establishment of the World Bank and the International Monitory Fund (IMF) were designed to cripple the economic power of the newly emerging nation-states in Africa. France and the United Kingdom used to hold the majority of colonies in Africa, and to this day, France still maintains close economic ties with its former colonies.

France helped its former colonies establish a common currency in West and Central Africa, known as the CFA Franc. However, the help France initially rendered quickly turned into exploitation.

As per the agreement, the countries in the common currency zone are required to put much of their foreign reserves in the French Central Bank. Today, the French Central Bank is answerable to the European Central Bank. By rough estimate, France benefits up to a whopping annual 400 billion Euros from this deal with the struggling African countries. Isn’t this sad, ridiculous and appalling? The eventuality of this becoming public knowledge prompted former French president Jacques Chirac to admit that France would collapse without African support.

The United Kingdom, on the other hand, didn’t establish a common currency for its former colonies. It guaranteed its companies gained comfortable access in the economic activities of the new nations in Africa. Backed by the United States, which had emerged as a new Superpower after the Second World War, the two countries joined forces to depose African leaders who stood their way. Many coups were sponsored by the Central Intelligence Agency (CIA) and British intelligence officials. After successfully getting rid of the ‘stubborn leaders’, they then installed their surrogate governments, whose primary duty was to ensure the flourishing of the Washington and London Empires. These events unfolded from the early 1960s to the late 1970s. By the middle of the 1980s, many African nations were in economic disarray. Brutal dictators – supported by the West – had plundered the continent’s resources. Europe had benefited significantly from the folly of these leaders.  Huge sums of monies stolen by these leaders were stashed in Brussels, London, Paris, Zurich, and other European cities. Many of these Western-backed dictators were later deposed by Soviet-backed guerrilla movements in Africa. Some of the dictators were killed, while others fled into exile. As they remained in death or exile, so did the monies they stole. Today, as we speak, African stolen monies are still in European banks, unable to be retrieved because there are no legal documents backing them.

The new African leaders who emerged in the late 1980s had no choice than to turn to the West to rebuild their economies, despite the feud. The Soviet Union was helpless because it too, was collapsing. The World Bank and the IMF became the center of attraction. Although these institutions announced a series of policies to assist, the policies fail to stand the test of time. Many African economies are in bad condition today, due to previous deals with the IMF and World Bank, which of course, is largely controlled by Europe. According to research conducted by a coalition of NGOs, and published by the Guardian in 2015, Western countries use aid to hide the “sustained looting” of Africa. Africa loses nearly $60 billion a year through tax evasion, climate change mitigation, and the flight of profits earned by foreign multinational companies on the continent. The continent receives $134 billion each year in loans, foreign investment and development aid from Western countries, but $192 billion leaves the continent each year. This leaves a shortfall of $58 billion, and has become the common practice. Africa’s wealth does not benefit its citizens.

Currently, the European Union (EU) has announced a $47.46 billion development aid program for Africa. The primary target of this EU development assistance is Nigeria, Africa’s largest economy and most populous country.

In the year 2000, the EU put forward a free trade agreement known as the Economic Partnership Agreement (EPA). The EPA demands that African countries fully open their market for European goods. It allows the EU to have unlimited access to African markets, thus, European companies can seize on the EPA to manufacture cheap goods and dump them on African markets. This ultimately collapses the fragile African manufacturing industries, since they do not have the capacity to compete with big European manufacturing corporations.

When details of the EPA were made public, it sparked outrage. Activists urged all governments on the continent to reject the EPA. But despite the protest, some countries went ahead and accepted the agreement. However, Nigeria has refused to do so. Nigeria insists rectification of the agreement would collapse its local manufacturing sector. From what is gathered, this ‘stubbornness’ of Nigeria has led the EU to announce this new development assistance. The priority is to convince the Nigerian government that Europe is committed to the progress of Nigeria. By giving most of the so-called aid money to Nigeria, the country will likely give in to European manufacturing corporations, to have unlimited access to the market.

This is how the West plays the game in Africa. The West pretends to be an angel in front of the cameras when giving aid, but turns greedy off camera, always taking back more than it has ever given.

This article (Europe’s Exploitation Deal: Announces $47 Billion New Development Aid to Kill off Africa’s Ailing Industries) is a free and open source. You have permission to republish this article under a Creative Commons license with attribution to the author and AnonHQ.com.