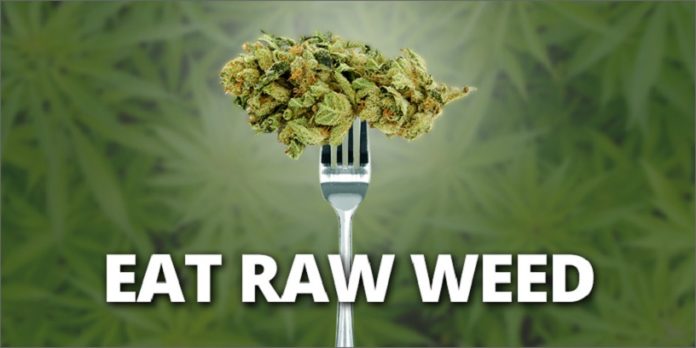 It is widely acknowledged that natural compounds of the cannabis — a plant that the use, sale, and possession of is still illegal in the United States — can prevent, treat and manage inflammation; neurodegenerative diseases such as multiple sclerosis; brain disorders such as epilepsy; lifestyle related diseases such as diabetes and cancer; chronic liver diseases such as liver cirrhosis; and medical conditions such as fibromyalgia.

Meanwhile, experts have come forward to make a strong case for eating unheated raw cannabis for maximum health benefits. While smoked or vaporized cannabis can be used as a medicinal therapy, they claim, eating raw cannabis can help prevent health issues from arising altogether — without psychoactive effect.

Dr. William Courtney, a California-based physician and a dietary raw cannabis specialist, says we are actually walking away from 99% of the benefits cannabis provides when we cook or smoke cannabis. He explains:

“In its raw form, the cannabis plant contains both THCA (Tetra Hydro Cannabinolic-Acid) and CBDA (Cannabidiolic-Acid), two cannabinoids known for their medicinal benefits; each of which must be heated in order to produce THC and CBD, respectively. Only when you decarboxylate THCA, turning it into THC, does it cause psychoactive effects or “the high” most associated with smoking cannabis.

“Additionally, the body is able to tolerate larger dosages of cannabinoids when cannabis is consumed in the raw form. This is because when you smoke cannabis, the THC actually acts as a CB1 receptor agonist and your body can only absorb 10 mg at a time.

“If you don’t heat cannabis, you can go up to five or six hundred milligrams and use the plant strictly as a dietary supplement by upping the anti-oxidant and neuro-protective levels which come into play at hundreds of milligrams of CBDA and THCA. It is this dramatic increase in dose from 10 mg of psychoactive THC to the 500 mg – 1,000 mg of non-psychoactive THCA, CBDA, and CBGA that comprises the primary difference between traditional medical cannabis treatments and using cannabis as a dietary supplement.”

It is no secret that cannabis contains a wealth of nutrients, proteins, vitamins, terpenes, Omega 3 and 6 fatty acids, essential amino acids, and antioxidants. When eaten raw, our body is able to process much larger amounts of THCA and CBDA — which possess anti-inflammatory properties, anti-diabetic properties, and anti-ischemic properties — and converts these cannabinoid acids — linked to the prevention of chronic diseases such as migraine, irritable bowel syndrome, glaucoma, and fibromyalgia — into essential nutrients through its metabolism.

Juicing, Dr. William argues, is the best way to consume cannabis, therapeutically.  For palatability and effect, he recommends soaking cannabis leaves in water for five minutes before juicing; blending raw cannabis with a minimal amount of organic fruit or vegetable juice, just enough to cut the bitter taste of the raw cannabis; and splitting the juice into small portions for consumption during the day.

Cannabinoids prevent cancer, reduce heart attacks by 66% and insulin dependent diabetes by 58%. Researchers have confirmed that cannabidiol, one of at least 113 active cannabinoids identified in cannabis, has the ability to ‘switch off’ the gene responsible for metastasis in an aggressive form of breast cancer, along with avoiding toxicity that is encountered with psychoactive cannabinoids at high doses.

Dr. William recommends drinking 4 – 8 ounces of raw flower and leaf juice from any Hemp plant, 5 mg of cannabidiol per kg of body weight, a salad of Hemp seed sprouts and 50 mg of THC taken in 5 daily doses. “The amount of cannabinoids we need would be difficult to get through smoked cannabis without feeling the intoxicating effects,” adds his wife, Kristen Courtney.

FYI: The U.S. Food and Drug Administration (FDA) has allowed the commencement of clinical studies with a new cannabis extract that contains cannabidiol as its active ingredient, for use in treating children with Dravet syndrome, a rare and severe genetic form of infantile-onset, that is also a drug-resistant epilepsy syndrome.

This article (Evidence: Eating Raw Cannabis PREVENTS Cancer, Does NOT Get You High) is a free and open source. You have permission to republish this article under a Creative Commons license with attribution to the author and AnonHQ.com.