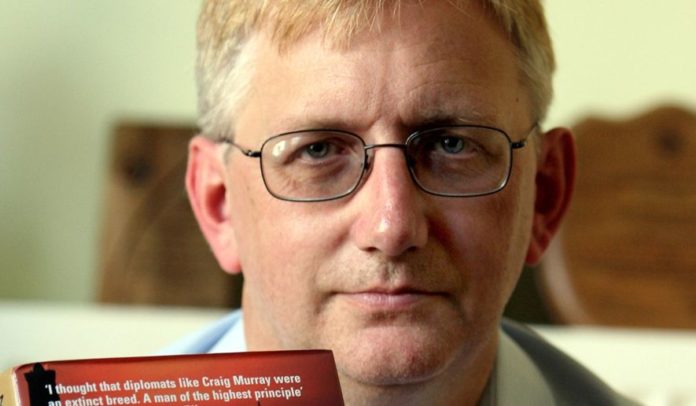 An ex-British government diplomat and ambassador of 20 years has come forward and given a public address about what he has witnessed on the ‘inside’ of the United Kingdom’s corrupt government.

Craig Murray was once a very patriotic man, admittingly going into his ambassador’s position somewhat naïve. Only 6 months after accepting his position, Murray states publicly how much his views of his nation and the systems in place internationally, had changed him.

On the Lead-Up to the Iraq War…

He says point blank to his audience:

“I discovered that in the country where I was ambassador [Uzbekistan], we [UK] and the Americans were shipping people in order for them to be tortured. And some of them were tortured to death.

Murray continues, telling how he saw the internal memos passed around.

“I know for certain…I can tell you they knew there weren’t any [weapons of mass destruction in Iraq] It wasn’t a mistake. It was a lie…it’s impossible to be proud of the United Kingdom.”

On the Afghan War…

Murray goes on to explain why the Afghan war also occurred – in the name of natural resources.

Naming former U.S. President George Bush Sr. as a main player on the Unocal energy board, a company that in conjunction with Enron, organized to build gas pipelines from Uzbekistan to Kazakhstan, over Afghanistan and down to the Indian Ocean, Murray tells of the real reasons behind the Afghanistan War and the private interests invested.

Murray claimed the consultants – also employed by George Bush Sr. – asked the Taliban initially, if they would provide security for the pipeline construction. Because the Taliban refused, the United States invaded.

They did have a “Plan B” however. According to Murray during his speech, the consultants for Bush’s Unocal included a Mr Karzai, who went on to become the president of Afghanistan from 2009 to 2014.


Uzbekistan and Torture is Far More Important than You Think…

Murray’s speech was given in Dec. 2016. It followed his banning to enter the United States in Sept. 2016 for undisclosed reasons, other than the Department of Homeland Security stating the once highly regarded British ambassador to Uzbekistan was now on a ‘list.’

Murray was due to honour former CIA agent turned whistle-blower, John Kiriakou, for his part in exposing the Bush-era torture program with the Sam Adams award, which he himself received 10 years earlier for displaying integrity and “moral courage in the midst of wrong doing on the part of the state.”

In 2009, Murray left his diplomat position to speak out against government corruption and the ‘House of Torture’ still occurring in the Stalinist Russian Gulags – including children being tortured in front of their parents; broken bottles forced into the victim’s anus; and feet being held over fires to burn – which operated to get “false” intelligence to provide the basis for the U.S. invasion of Iraq.

Murray, however, wrestled with his conscience and exposed his government’s knowledge and the United States’ condoning of the “most sadistic methods of torture by Uzbek authorities” used to “extract information” to give to the western governments between at least 2002-2004.


“Murray uncovered a torture infrastructure within the country that once silenced Uzbeki dissidents and fed the Americans shaky intelligence they were so desperate for, as the War on Terror on Iraq and Afghanistan began to unravel.”

Murray, after reporting the details to London head office, was told to stop “over-focusing on human rights” and focus more on “commercial rights,” Murray said at his speech.

Murray essentially became a whistle-blower after what he witnessed. Uzbekistan, was viewed by the U.S. and the UK as a long-term interest, primarily over “profiting from its oil reserves and geopolitical position,” reports The Real News.

Fast forward from Murray’s 2009’s accusations to expand on these disturbing revelations of the western interests over Uzbekistan – to 2016 – and Murray continues to enlighten the public of the evils of the western government today, not dissuaded by potential dangers, but holding his moral ground with his head held high.

This article (Ex British Ambassador Tells How UK, US, and George Bush Sr. Scripted Iraq and Afghanistan Wars [Watch]) is a free and open source. You have permission to republish this article under a Creative Commons license with attribution to the author AnonWatcher and AnonHQ.com.