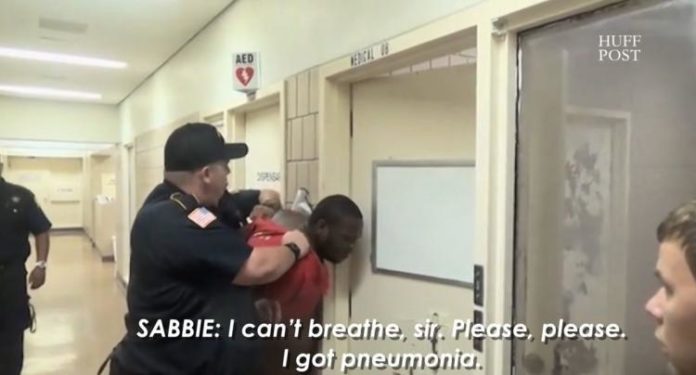 Another black man has died at the hands of corrections deputies, this time, in a Texas-Arkansas border jail. Michael Sabbie, a father of four, was found dead in his cell after repeatedly telling officers “I can’t breathe.” A video of the initial incident was released, which showed his being repeatedly pepper sprayed and piled on top of, by five guards. The guards obviously thought he was lying and threw him into his cell, where he would die of suffocation. Sabbie was arrested after a verbal altercation with his wife. There were no allegations of battery and Sabbie denied ever threatening her, as was reported to police. Domestic assault is a mandatory arrest, even if there is no evidence. Yes, you can go to jail for a verbal allegation alone, without any supporting evidence. Regardless of the crime, the video that was released does not show any kind of violence or provocation that required a violent response from the guards.

On the video, you see Sabbie walk away from an officer calmly. He is then grabbed and thrown into a wall. It takes several attempts for the guard to get him onto the ground, however, Sabbie is still not struggling. This a classic case of imaginary “stop resisting,” only this time by a ten dollar an hour un-trained rent-a-cop. The facility in question was a private jail, which was staffed by a private contractor – not corrections trained deputies. He was pepper sprayed repeatedly and by the end of the incident, had five guards piled on top of him. The guards then carry him and force him into a hot shower to wash the pepper spray off of him. He falls to the ground, the whole time telling them “I can’t breathe.” After the death of Eric Garner at the hands of the NYPD, one would think authority figures would take extra precaution to avoid a similar situation. The guards failed to provide any of the necessary medical attention that law and policy would dictate. Instead, they tossed him into his cell where he would be found the next morning deceased.

Edwin Budge, an attorney who represents families who have suffered similar losses, stated “Clearly he’s a person in a state of medical crisis, in medical need, asking for help, and the response to his essentially pleas for medical help is inhumane, which is a term I don’t use lightly.” Sabbie’s death was completely preventable and a result of unnecessary force in the first place. The failure to provide medical care resulted in his death, however, officials from the jail have concluded that Sabbie did not die of suffocation, instead claiming that he died of “hypertensive arteriosclerotic cardiovascular disease,” otherwise known as a heart attack. Attempting to distance themselves from Sabbie’s death, officials have found no wrong-doing on the part of any of the guards involved. Despite the family attempting to have charges placed upon the guards involved, the Attorney General’s office stated that no charges will be brought. “I can’t put into words how devastated my children and I are after the loss of Michael. He was my backbone and best friend. My children lost a wonderful father who wanted the best for his family. A piece of our heart is gone and I pray to god for justice. This tragedy never should have happened,” stated Sabbie’s wife, Teresa, to the press.

In the twelve months following the death of Sandra Bland in a jail cell, there have been over 800 in-custody deaths. The reality is, police and jail guards simply don’t care about the health and well-being of their prisoners. If they did have an ounce of compassion, they are so ridiculously under trained, there is no way they’d recognize a real emergency until it’s too late. The failures of law enforcement and corrections, to adequately care for those in their custody, is a significant problem – with nearly 3 people per day dying in jail. Until we change these broken systems, and learn to care for each other as human beings, there will never be justice.

This article (Father of Four Dies in Jail at the Hands of Guards After Shouting “I Can’t Breathe”19 times) is a free and open source. You have permission to republish this article under a Creative Commons license with attribution to the author and AnonHQ.com.