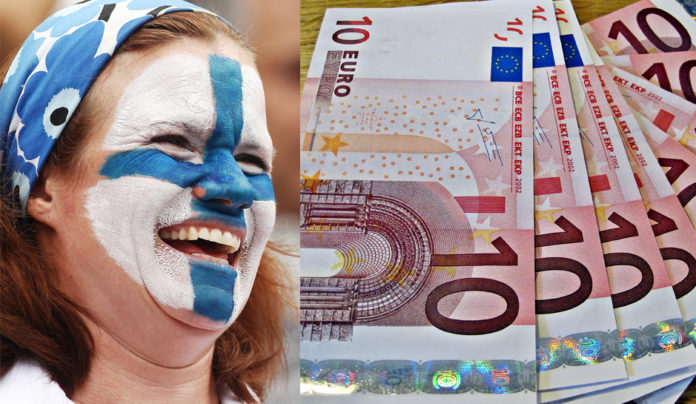 Finland is planning to pay its adult citizens, regardless of whether or not they receive any other income, €800 per month as part of its plan for a national basic income in place of current social welfare payments, child benefits, and state pensions. The average monthly income currently stands at just over €2,000.

The goal of the new proposal is to curb unemployment by making it easier for residents to look for work without personal cost. At the moment, a temporary job results in lower welfare benefits, which can lead to an overall drop in income. About 9.5% of Finns are currently out of work – the highest rate in more than a decade – and the government believes some people are deterred from working because they’re better off on unemployment benefit than accepting a minimum wage job.

Finland wants to give every adult $10,000 a year. Here’s why: https://t.co/URAvlSgBHW pic.twitter.com/iDC3pyxUUJ

The proposal is being prepared by the Finnish Social Insurance Institution (KELA) to be presented in November 2016, and it is still unclear how the government will afford the costs. Though a survey commissioned by KELA in September showed that 69% of the Finnish population is in favor, giving every adult Finn €800 per month comes with a pretty hefty price tag. If the population of 5.4 million Finns was given €800 each every month, it would cost the government €52.2 billion a year. With around 4.9 million adults in Finland, this would still cost €46.7 billion per year. The government expects to have €49.1 billion in revenue in 2016.

The Government’s program calls for the implementation of a universal basic income experiment. The purpose of the experiment is to find ways to reshape the social security system in response to changes in the labor market. The experiment will also explore how to make the system more empowering and more effective in terms of providing incentives for work. Further objectives include the reduction of bureaucracy and the streamlining of the complicated benefits system.

A three-year-old recession has prompted Finnish finance minister to label the country the new “sick man of Europe”.

The Finnish economy is in a serious situation. GDP growth is close to zero. Unemployment is rising and unemployment spells are becoming longer. Even once the recession is over, growth will be painfully slow. In 2015, Finland’s GDP is forecast to show growth of 0.2%. Finland’s public debt will exceed the 60% limit in 2015.

According to the Finnish Business and Policy Forum think-tank, the average Finn works fewer hours a week than any other EU citizens. The government estimates Finland has fallen 15% behind Germany and Sweden in labour cost competitiveness, resulting in a loss of global export market share. Further, according to Eurostat data, Finland is expected to have the highest old age-dependency ratio among all EU countries by 2020, 35.8 persons aged 65 or more per 100 people of working age.

Despite all this, the government is willing to take a big risk to eradicate poverty. However, one of the many obstacles to staging a pilot project is Finland’s constitution, which states that every citizen must be equal. Even a small-scale experiment would put its participants in an unequal position. Also, the richest would pay most of their share back in taxes.

Finland is not the only country that is debating basic income programs. Although the parliament in Switzerland voted strongly against a motion for a basic income in September, Switzerland will hold a referendum on a proposal to pay each citizen about 2,500 Swiss francs a month next year.

The Netherlands also plans to begin universal income pilot projects in several cities next year, with Utrecht set to undergo a pilot project in January 2016. A group of people already receiving welfare will get monthly checks ranging from around €900 ($1,000) for an adult to €1,300 ($1,450) for a couple or family per month.

A similar experiment was conducted in Manitoba, Canada, between 1974 and 1979. An after-the-fact examination of the experiment found that a broadly implemented form of the policy “may improve health and social outcomes at the community level”.

This Article (Finland Plans To Give Adults €9600 Every Year – As Tax-Free Basic Income, No Strings Attached) is free and open source. You have permission to republish this article under a Creative Commons license with attribution to the author and AnonHQ.com.