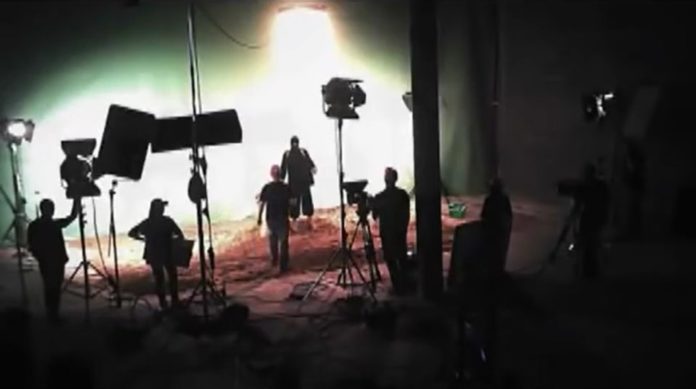 In a report from Press TV, footage has apparently been leaked from a staffer of U.S. Senator, John McCain, showing an ISIS “execution” video being filmed in studio. The video is very similar to those which portray the beheading of James Foley, as well as other victims. We should not forget that John McCain Admited LIVE On Fox News That He’s “Intimate” with ISIS. The footage lasts a little over 3 ½ minutes, and shows a man reported to be ISIS executioner, “Jihadi John” (a.k.a. Mohammed Emwazi) standing before a green screen with a kneeling hostage in an orange jumpsuit. In this particular scene, the man in the orange jumpsuit also has a green screen hood over his head. All of this is being filmed in the presence of a production crew, and as an interesting side-note, notice the t-shirts and baseball caps being worn by the crew.

The video is reported to have been obtained from the cellphone of McCain’s staff by the Hactivist group, CyberBerkut, who then released it to Leaksource with this message:

“Dear Senator McCain! We recommend you next time in foreign travel, and especially on the territory of Ukraine, not to take confidential documents.

On one of the devices of your colleagues, we found a lot of interesting things. Something we decided to put: this video should become the property of the international community!”

Many around the world believe that at least some of the execution videos were staged, and according to British forensic experts, Foley’s execution was most likely staged using camera trickery and post-production techniques.

“After enhancements, the knife can be seen to be drawn across the upper neck at least six times, with no blood evidence to the point the picture fades to black,” the analysis said.

Another expert stated, “I think it has been staged. My feeling is that the execution may have happened after the camera was stopped.”

Why stage an execution before the actual execution?

“To see it clearly would make it almost unbelievable. It would numb us,” Shashank Joshi, senior research fellow at the Royal United Services Institute in London, said in September of 2014. “This way makes it an even more powerful form of propaganda as deed.”

Apparently Shashank Joshi’s never seen a Mexican Cartel execution video (we won’t provide one, look it up yourself).

Another example of a staged video was the execution of 21 Egyptian Coptic Christians. The executions supposedly took place on a beach in Libya, however according to Hollywood horror film director, Mary Lambert (Pet Sematary), who analyzed the video for Fox Opinion Network, it was most likely faked as well. A dead giveaway, look at the proportion of the executioners in comparison with the prisoners: “In the opening shot all the figures might be animated. They never had more than six men on the beach… The close-ups of jihadists on the beach are most likely green screen… The sea turning red is obviously FX,” Lambert stated.

While the suspicions behind some of the beheading videos are old news, this new piece of the puzzle adds another, not-so-surprising angle. It cannot be denied that the videos serve as propaganda, however the question as to who it’s benefiting can be confusing.

On the one hand, the videos draw a lot of attention to ISIS and serve as a recruitment tool. On the other hand, they also do well to feed U.S. terrorist propaganda, instilling fear and anger into the citizens, thereby promoting more political violence.

The fact that there’s so much controversy behind the execution videos has led to numerous conspiracy theories on the topic, and yet again, it is up to the reader to draw their own conclusions. But, taking the U.S. government’s history into consideration—from manipulating its way into war, to the numerous false flag attacks—the idea that the U.S. is somehow behind at least a few of the beheading videos (should the newly leaked video be accurate) cannot come as a surprise.