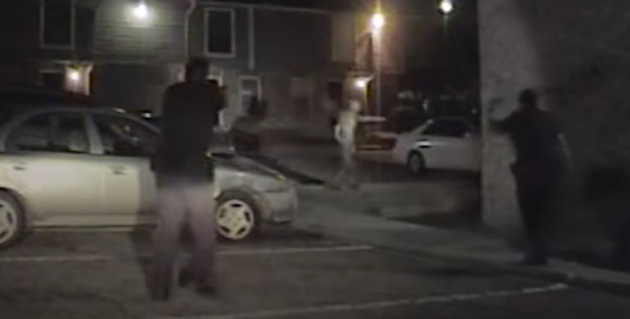 The blatant disregard for human life that police continue to demonstrate is nothing short of morally reprehensible. The only thing more disturbing is the fact that supposed “good cops” continue to cover for the bad ones. Never has this been more true than with the case of David Collie. Collie was shot in the back by an off-duty Fort Worth Texas police officer who was moonlighting as a security guard for an apartment complex. Despite the clear cut case of attempted murder of an unarmed man, the insiders at the Fort Worth PD white-washed the case. The video was released by Collie’s attorney, who has stated that his client is now permanently paralyzed below the waist. The video clearly contradicts the unnamed officer’s lies. The officer and his partner were working an off-duty detail as rent-a-cops for the night when a call went out for a nearby robbery. As Collie matched the description – being black and having his shirt off – the officer confronted him. The video shows Collie walking into the frame and the officer pulling his gun immediately. He issues commands to Collie, who then points to his left and continues to walk, as he was obviously headed in that direction. In a flash, the officer shoots Collie in the back.

The cop, who has yet to be named, wrote a series of lies in his report, claiming that Collie threatened him with a “silver object,” that he believed was a gun. Big shocker – there was no gun. The same old story of “he feared for his life” is again being recycled. According to Fort Worth police, they recovered a box cutter from a nearby bush, but remember, this is the “official “version of events. Collie stated that the box cutter was not his and that police found it nearby. He was hospitalized for months and then charged with aggravated assault. Once the district attorney watched the video, the charges were quickly dropped.

Despite the video, the department continues to defend the murderous tendencies of their officer. No level of proof is sufficient for these cops who only care to defend their own, regardless of who gets hurt in the process. The taxpayers are the ones on the hook and will be again in this case. The department used the “it was late and dark” excuse to back their officer, who they refuse to name. The officer has already returned to duty, a clear indicator of where the district attorney is going with this case. Truth and justice are rarely considerations when the life of a cop hangs in the balance.

Collie wanted the video released to show that he was innocent of any wrongdoing and that he never threatened any cop. To watch the video and decide that it’s anything but an unlawful attempted killing is to deny the truth being told by your own eyes. Collie was walking away and posed no threat, however, he was shot within ten seconds of the officer arriving. Collie’s lawyer, Nate Washington, said that his client “didn’t do anything to threaten an officer. “In regards to race, Washington stated, “I don’t believe most people are racist but there are indeed racial biases that persist, and they don’t go away when you go to the police academy. Having racial biases doesn’t necessarily make you a bad person but we need to find a way to remove them when it comes to police work.”

This is the second video to surface from the Fort Worth Police Department, showing their officers quickly escalating things to violence – when they absolutely didn’t need to. The cell phone video of a rookie cop tackling a forty-year-old black woman to the ground after she called police for help, was the first to draw attention to what is obviously a troubled department. Although the case was covered up by the Fort Worth Police, the shooting is “under review” by the district attorney’s office, who refuses to comment due to the case pending investigation.

At the time of writing, the Fort Worth Police website, http://www.fortworthpd.com/ appears to be offline.

This article (Fort Worth Cop Shoots Man in the Back – Video Debunks Cop’s Story, Yet Still No Charges) is a free and open source. You have permission to republish this article under a Creative Commons license with attribution to the author and AnonHQ.com.