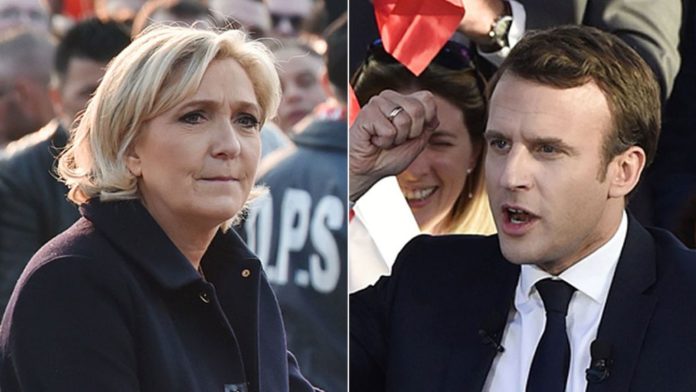 Keeping with US tradition, Macron has hinted at Russian interference after a trove of emails from his En Marche! Party were found posted online to Pastebin by EMLEAKS. The hack occurred days before voters are due to cast their decision at the polls.

“The En Marche! Movement has been the victim of a massive and co-ordinated hack this evening, which has given rise to the diffusion on social media of various internal information,” a statement released by En Marche! said.

The documents released are said to be a mix of authentic and fake documents outlining the basic functioning of political campaigning and funding. Far-right French candidate Marine Le Pen also said her National Front party had also been targeted but there are no documents so far posted online.

Julian Assange has distanced himself and WikiLeaks from connections to the data dump, however have participated in analyzing the content. WikiLeaks did tweet their skepticism of Macron calling the documents a mix of fake and real content.

“We have not yet discovered fakes in #MacronLeaks & we are very skeptical that the Macron campaign is faster than us,” WikiLeaks tweeted. They also acknowledged the #MacronLeaks won’t change the outcome of the French election because of the lead Macron continues to hold.

We have not yet discovered fakes in #MacronLeaks & we are very skeptical that the Macron campaign is faster than us https://t.co/jX7GPTW9uC

Russian connections have been hinted at by WikiLeaks, but acknowledged the ‘cyber print’ is unclear.

A blackout was put in place to prevent the discussion of, or publication of any dumped data now that the campaigning has ended. The media gag was initiated only minutes after Macron confirmed the leaks had occurred; to prohibit any dissemination of information in case it influences the election. The French media faced censorship warnings not to publish the email dump, saying media outlets faced criminal prosecutions if they proceeded. Macron’s party also specifically asked the media not to publish anything on the leaks, saying they needed to be “responsible.”

“We are calling to the media willing to cover this, to be responsible. It is not a simple hacking but a tentative to disrupt the presidential election,” Macron’s campaign said.

Campaigning stopped on Friday evening, giving voters a chance to reflect on their May 7 vote in what is a historically important and unprecedented French election. Neither the traditional Gaullist nor Socialist party made the run-offs, something not seen since 1958.

Le Pen also made claims of ballot tampering this week, telling the commission that Le Pen ballots had been discovered in several regions including Loire, that were “systematically torn up.” The electoral watchdog is investigating both the computer hacks and ballot tampering.

Polls suggest Macron will win comfortably, but observers are skeptical until the official count is in.

This article (French Election Media Face Blackout After Macron Email Dump Found Online) is a free and open source. You have permission to republish this article under a Creative Commons license with attribution to the author AnonWatcher and AnonHQ.com.