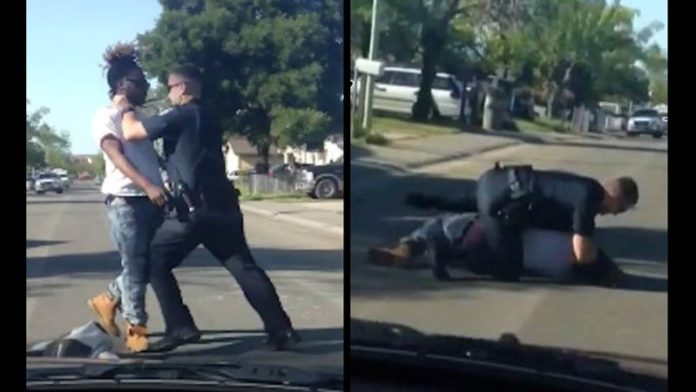 Nandi Cain Jr. is the latest victim in a long line of victims to have their encounters with police go viral. Cain was walking down the street minding his own business, when the officer, who is still unnamed, decided to stop him. The video that was released on Facebook was taken from inside a passing vehicle. The video starts with the officer confronting the man who is standing on the road. The man takes off his jacket to show he is unarmed. The cop then tackles the non-resisting man and then repeatedly pummels him with closed fists as the man struggles to defend himself. The Sacramento police did the right thing in condemning the officer’s actions, suspending him pending the outcome of not only an internal investigation, but a criminal investigation as well. The dash cam video of the incident that was released shows Cain cross legally at an intersection and continue along the sidewalk. The officer gets on his radio and tells dispatch he will be out with a suspect, even though no violation has occurred. The officer approaches Cain who continues to walk on his way. The officer had no basis for a stop and appears to have initiated a “consensual encounter” by asking the man to “come here” instead of commanding him. When Cain stepped onto the street, the officer then lies and tell him he was jaywalking and commands him to stop. Moments later the officer attacks, unprovoked. Despite the entire incident being captured on video and the Sacramento Police Department themselves condemning the officer’s actions, police apologists have concocted their own interpretation of reality and defended the indefensible. Right-wing police apologist website bearingarms.com released an article titled Sacramento PD Sells Out Officer In Videotaped Arrest, in which they slam the media and the Sacramento PD for not backing the officer in question. According to the author Bob Owens, ‘the camera itself is only a recording device, not an understanding device. What they “see” is actually only an interpretation, and that interpretation is shaped by their perceptions.” Apparently police apologists don’t believe that the public can interpret for themselves when a man is unwantonly beaten, unless they’ve had special training.

According to Owens, “A textbook use of force turned into sensationalized BS after Fox 40 reporters obtained video showing a Sacramento police officer arresting Nandi Caine Jr. on Monday.” Owens fails to see why being unlawfully stopped and beaten by police should make international news. “They [the media] have no interest at all in telling both sides of the story, and instead draw revenue from inflaming public opinion with controversial statements about how officers hand incidents, with no concern as to why the officers are using the TTPs (tactics, techniques, and procedures) that they do in a given incident.”

Other pro-police organizations like policeone.com and bluelivesmatter.blue have remained eerily silent on the issue, failing to cover the story at all. The blatant apologist description of the incident as put forth by bearingarms.com is nothing more than propaganda from those who are dedicated to the badge, regardless of facts. With the city and district attorney getting on board with this case from the start, charges would appear to be in store for the unnamed officer.

This article (Police Apologists Defend Sacramento Police Beating Alleged Jaywalker) is a free and open source. You have permission to republish this article under a Creative Commons license with attribution to the author and AnonHQ.com.