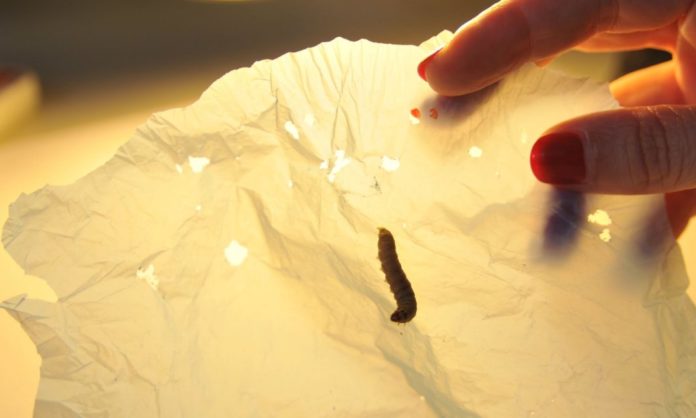 The world produces around 300 million tons of plastic per year, but recycles just 14% of the plastic packaging it uses. Recycling the remaining 86% of used plastic, which is either burned or dumped in landfills and oceans, can create $80–$120 billion in revenues.

Yet a staggering 8 million metric tons of plastic ends up in the oceans each year killing millions of birds, fish, whales, seals, and sea turtles. It is estimated that plastic in the oceans — shopping bags, bottles, toys, food wrappers, fishing gear, cigarette filters, sunglasses, buckets and toilet seats — will outweigh fish by 2050.

But researchers at the Institute of Biomedicine and Biotechnology of Cantabria in Spain may have found a solution to plastic waste and marine pollution. Federica Bertocchini, a research scientist at the Spanish National Research Council (CSIC), discovered a plastic eating caterpillar — commonly known as a wax worm — by chance. Bertocchini, an amateur beekeeper, was cleaning up one of the beehives she keeps at home when she found that it was infested with caterpillars that eat the wax bees use to build their honeycombs. She immediately put the caterpillars in a plastic bag, and went about cleaning the beehive.

“I removed the worms, and put them in a plastic bag while I cleaned the panels. After finishing, I went back to the room where I had left the worms and I found that they were everywhere. They had escaped from the bag even though it had been closed and when I checked, I saw that the bag was full of holes. There was only one explanation: the worms had made the holes and had escaped. This project began there and then.”

The accidental discovery led Bertocchini to team up with biochemists Paolo Bombelli and Christopher Howe at the University of Cambridge to investigate the feeding habits of the centimeter-long Galleria mellonella grubs and to determine whether these caterpillars could be used to resolve the global plastic crisis.

In lab tests, they discovered that 100 caterpillars could devour 92 milligrams of polyethylene plastic bag in as little as 12 hours.

Moreover, the caterpillars were not only eating the incredibly resistant plastic, they were chemically transforming the polyethylene into ethylene glycol (an inexpensive and miscible solvent with a low freezing point and high boiling point, and a structure similar to water). The researchers found the larva of Galleria mellonella could biodegrade one of the toughest, most resilient, and most used plastic — polyethylene— in a similar way to eating beeswax.

“Wax is a polymer, a sort of ‘natural plastic’, and has a chemical structure not dissimilar to polyethylene. We are planning to implement this finding into a viable way to get rid of plastic waste, working towards a solution to save our oceans, rivers, and all the environment from the unavoidable consequences of plastic accumulation. However, we should not feel justified to dump polyethylene deliberately in our environment just because we now know how to bio-degrade it.”

While the researchers acknowledge the discovery requires further investigation and it may be far from an actionable solution to plastic waste, Bertocchini told The Atlantic she hopes to identify the enzymes the caterpillars are using to degrade polyethylene: “Maybe we can find the molecule and produce it at high-scale rather than using a million worms in a plastic bag.”

Paolo Bombelli of Cambridge University believes the discovery could lead to a solution to the plastic waste mounting up in waterways, oceans and landfills:

This article (Scientists Accidentally Discover Caterpillar That Eats Plastic) is a free and open source. You have permission to republish this article under a Creative Commons license with attribution to the author and AnonHQ.com.