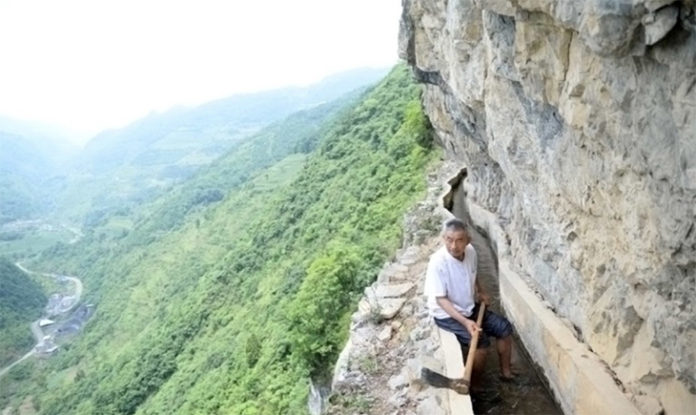 How much of your life would you give to carve into not one, but three sheer, rocky, mountainside cliffs to provide water to your drought-stricken village? A tenacious man named Huang Dafa spent 36 years carving a 10-kilometer water channel. He kept going after several failed attempts, and people called him a fool. He is now a celebrated figure in his community at the ripe age of 82.

Dafa was sneered at when he first suggested cutting into a mountainside cliff in Caowangba within China’s Guizhou Province with hand tools. Locals called him a foolish man. They thought he might be crazy. He is now compared to the legendary figure, Yu Gong, whose determination was so profound, it caused the Gods to move mountains for him.

Dafa’s first attempt to create a mountainside irrigation channel failed, but it did create a tunnel through the mountains making it easier for people to travel.

He realized that he needed more knowledge to complete the project successfully, so part-way through he abandoned his efforts temporarily after finally having compelled some fellow villagers to help him chip into the mountainside. He left to study engineering.

When he returned, he had a more meticulous plan. Workers often slept in mountain caves to finish the carving, high above and away from their families.

Huang Dafa is now called a living Yu Gong, after the mythical figure who convinced the Gods to move mountains.

Huang and the villagers started from higher elevations and rappelled down the mountain this time. Ropes were tied around their waists like a special-forces team- albeit they were simply farmers armed with only rudimentary tools. Some reported that their legs, “melted” from the hard work.

Dafa couldn’t even get to his own daughter and grandson’s funerals who died while he was working on the project, but the plan worked.

Dafa’s irrigation channel cut into a mountain face now supplies 1,200 people in his own small village with water and three others that just happened to be along the 10-kilometer channel. His village can now grow more than 400,000 kilograms of rice every year, too. And to sweeten his success, the town now has electricity and a new road which came due to his efforts.

His ambitious project began in 1959 and required 36 years of hard labor to complete, but his village is now thriving, and he is a local hero, worthy of the mythical status of Yu Gong.