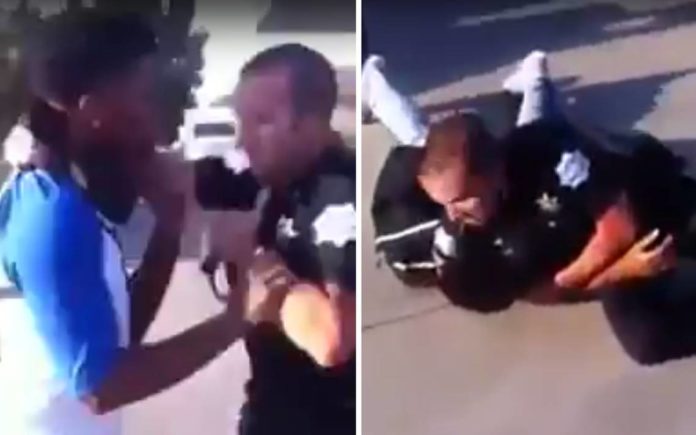 Cell phone video has surfaced, showing police protecting and serving the hell out of the community. A Fresno Police officer was seen physically confronting a black teenager over the heinous offense of crossing the street against the light. The Hoover High School student allegedly had been warned by the cop not to cross, instead of letting this one slide, the cop escalated the situation, taking it somewhere it didn’t need to go. The video went viral, once again drawing attention to the seemingly never ending struggle against the growing police state.

Neither the officer nor the students involved have been identified. The video doesn’t catch the initial interactions, however we can tell from the beginning that the student isn’t obeying a lawful command. Despite how petty the officer’s reason for stopping him was – if he committed a traffic violation, the officer has a right to detain him. You can’t tell from the video if the student was attempting to walk away. Even the Chief of Police, Jerry Dyer skirted the issue when he gave a statement to the press, only referring to the officer confronting the student on the other side of the street where the “scuffle began.” While we don’t know explicit details as to the events prior the start of the video, we can gather a general idea. If we assume for a second that the student knowingly attempted to walk away from the officer after being commanded to stop, did the officer have the right to grab, choke and ultimately slam the student on the ground? The short answer is yes. From a legal perspective, regardless of the initial offense, if you resist a lawful command and continue to walk away, it is an easy scenario for a cop to articulate why he had to kick your ass. Right or wrong, that’s how it is. The cop’s legal ability to do what he did is not in question, if the student tried to walk away. From looking at the video, it’s a good possibility. The problem with this officer’s behavior is deeper than what we see on the video. He demonstrated one of the fundamental problems with American policing, which will mostly likely never be addressed.

The first rule of policing is officer safety. The need to protect yourself is paramount.

The concept is taken to an extreme, in justifying the mass number of police shootings we see, yet on a daily basis it is a fundamental mindset and practice for cops. Imagine from the perspective of the camera in this case, that instead of a camera, it was a genuinely hostile subject with a gun.

There were a dozen or more opportunities left wide open by the officer – if the guy holding the camera wanted to hurt him. He exposed his weapon a handful of times. Once he took the student to the ground, he would have been a sitting duck if the cameraman wanted to harm him. Instead of yelling Black Lives Matter, the cameraman could have been throwing punches or kicks. Can you see how this is a problem? As a cop, you need to pick and choose your battles. This was a battle that could have cost the officer his life because of his own failure to conduct police work in a safe manner, and allowed his own ego to get in the way of his judgment. This is one of the fundamental problems with police work. I like to call it cowboy cop syndrome.

If, and that’s still a pretty big if, the student was walking away from him, how else could he have handled it? Well, first off, you know where the kid goes to school and what he looks like. This isn’t crime of the century stuff. How about calling for backup? If you call on the radio that someone is walking away from you, you are going to have every available unit jump your way, especially on day shift. This is how you handle this situation without flexing your muscles, violating officer safety and putting your own life at risk.

Yet, you will rarely hear of these issues addressed by the police or the media. The biggest violations here are more than likely use of force and officer safety policy. I guarantee there is a policy in the books of Fresno police addressing going hands on with multiple suspects without backup. Officer safety, as is evident by this case, if conducted properly, protects everyone. If the officer in this case had used proper judgment and not allowed his ego to call the shots, this incident would never have occured.

From the perspective of a defense attorney, there is an easy way to see if the officer singled this student out. When you examine the officer’s ticket history, particularly at that location; if the stop of the student doesn’t fit a pattern of citations written by the officer, that’s a good indicator he was singled out. For example, if for the last three months the officer only wrote speeding tickets from two locations, this pedestrian violation would violate his usual pattern of behavior. It would stick out like a sore thumb, statistically. Examining patterns of behavior through statistics is a good way to monitor an officer’s true intentions.

The biggest crime I observed in this video, is the blatant felony battery that the motorcycle officer commits when he pulls on scene, bumping the cameraman out of the way. There’s just no way around it. You can’t do that. That is by law, an aggravated battery with a deadly weapon. The cameraman was far enough away that he posed no threat. At no time in the video does he make any aggressive moves. The officer hitting him with the vehicle is a constitutional violation, if ever there was one.

According to the chief, the incident was sent to Internal Affairs for further investigation. The chief’s statement to the press was of surprisingly neutral in tone, with a chief usually backing their officer from day one. Based on the video, it is likely a lawsuit will be filed by one of the student’s families.

Sources: Photography Is Not A Crime, Fresnobee.

This article (Fresno Cop Filmed Wrestling with High School Student goes Viral) is a free and open source. You have permission to republish this article under a Creative Commons license with attribution to the author and AnonHQ.com.