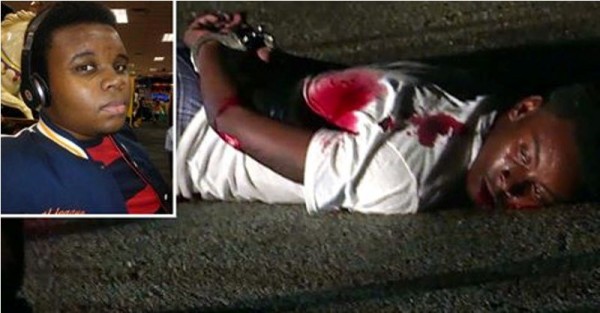 Police in Ferguson, Missouri have shot an 18-year-old boy, who is said to be a close friend of the late Michael Brown, during a commemoration protest — marking one year since Michael was shot dead by a white police officer.

The death of Michael Brown last year brought a series of protests in the city as activists said justice was not served after Michael’s brutal death.

The victim of the latest shooting has been identified as Tyrone Harris Jr., from St. Louis. He is said to be in critical condition in the hospital and many activists say he is fighting for his life.

#TyroneHarris fights for his life. Shot by police on the anniversary of his friend #MikeBrown‘s death. #Ferguson pic.twitter.com/pQgQ1BRe6Z

The head of the St. Louis County police, Jon Belmar, told media outlets that a man opened fire on plainclothes detectives on the evening of the protest — Sunday, August 9th, 2015. The man, he said was then pursued and shot by officers. The police chief said the suspect was in a “critical” and “unstable” condition in hospital and undergoing surgery.

Belmar added that the suspect had been tracked throughout the protest as police believed he was armed. He said officers told him that the suspect approached the detectives who were sitting in a van and opened fire with a 9mm gun that had been stolen last year.

The police chief said none of the officers were seriously injured and that the officers have been placed on administrative leave, in line with standard practice after police-involved shootings.

Therefore, from the account of Chief Belmar, Harris Jr. was armed and first opened fire on officers which led to officers returning fire. But Harris’s father, Harris Sr., strongly disputed the police account that his son was armed. He was quoted by RT News as saying, “We think there’s a lot more to this than what’s being said.”

However, on Monday August 10, 2015, chief Belmar again told a news conference that a second shooting had occurred in Ferguson. He said the incident involved two groups of people on the west side of West Florissant Avenue and that 40 or 50 shots were fired in an exchange between the two groups.

He described the incident as “remarkable,” lasting around 45 seconds. “They were criminals. They weren’t protesters,” he said. The acting head of Ferguson’s Police Department, Andre Anderson, also confirmed that several people were detained during the protests and that the incident will be fully investigated.

Michael Brown was killed by white Police Officer, Darren Wilson, on August 9th, 2014. He was walking through a St. Louis suburb when he became involved in an altercation with the officer. Wilson fired approximately 12 shots from his department-issued handgun. At least eight of them struck Michael’s body and two were fired at his head, despite the fact that Brown was unarmed, according to the RT News.

A grand jury and the US Department of Justice refused to prosecute Wilson, which led to riots in Ferguson and across the US, with protesters angered in their belief that justice had not been served.

This Article (Late Michael Brown’s Friend Shot By Police In Ferguson, He Is In Critical Condition) is free and open source. You have permission to republish this article under a Creative Commons license with attribution to the author and AnonHQ.com.