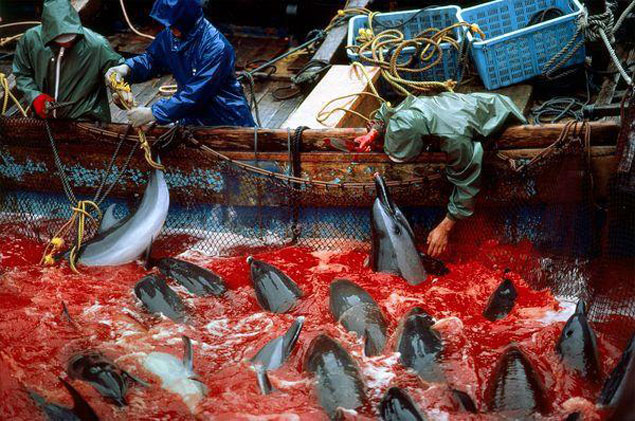 Many people don’t know the truth about dolphins in captivity and believe that they swim happily into tiny captive pools. I decided its time to break that myth.

From September 1st of each year Taiji, a small cove in Japan, will become the world centre for dolphin slaughter and capture for dolphinariums around the world. This is a shocking and violent act which lasts until the thirtieth of April.

Each morning a group of about 26 “fishermen” go out in around 12 boats in search for dolphins or small whales. If one boat finds a pod they signal to the others with smoke. Once around 5 are together the start to scare the dolphins into shallow water by hammering the side of the boat to create a deafening “wall” of sound. This terrifies the dolphins, causing them to panic and swim away from the sound, in the direction of the driving boats, thus driving them straight toward “the cove” where the torture begins until they die. The dolphins are terrified, they can be kept up to 4 days with no food, trapped in a tiny cove.

“These dolphins are wrangled and wrestled into the killing cove, where they’ve sustained multiple injuries. Dolphin killers deliberately run over the pod with skiffs, they wrestle them, man-handled them into captive nets before even being slaughtered,” Melissa Sehgal, a Sea Shepherd activist, told Reuters.

The cove has a covered area, the purpose to hide the truth of what happens there. Hidden from view, the fishermen drive metal rods into the dolphins’ spinal cords and leave them to die. It takes up to 5 minutes for these dolphins to die, they bleed out, suffocate or drown then are loaded on to skiffs and taken the butcher house.

Maybe they are the lucky ones, the unmarked, beautiful ones are captured. Often the trainers of dolphin shows will take part. These, usually young dolphins are physically restrained, wrestled and netted, lifted out the water and taken to small pens, where they begin their life service to the entertainment industry. As we know dolphins are sentient beings with human like family structures. Their mother names them, they are taught manners, love to play and explore. They are very intelligent, have remarkable systems of echolocation and communication. In relation to body size, the brain of the adult bottlenose is comparable in size to that of humans,  it is twice as complicated and possesses 11/2 times as many cells.

they are capable of imitation and memorisation. They have been shown to demonstrate foresight and learn from observation. They can problem solve and preform elaborate tasks all in the wild. The dolphins are extremely traumatised after the experience of seeing their family slaughtered.  Its a slow process to begin training them. Firstly they are tube fed with force into their stomachs a concoction of liquidised fish and tranquillizers. Its alien for wild dolphins to eat dead fish so they have to learn to eat it.  Once this happens the training begins.

The natural talents of these amazing creatures are manipulated by the trainers using a discipline based on reward i.e. the trick or manoeuvre is carried out correctly, they get food. Do it wrong, they starve.

The trick is to make the public believe the dolphin is doing these tricks for the sheer fun of it. This couldn’t be further from the truth.

In some cases captive dolphins have been known to commit suicide by starving themselves to death, battering the walls of the tanks repeatedly and even drowning. They are air breathing mammals like us and need to consciously make the decision to breathe. The next time you consider paying to see a captive dolphins show or a swim with experience remember this, to pay the entry fee you are paying for dolphins to be slaughtered.