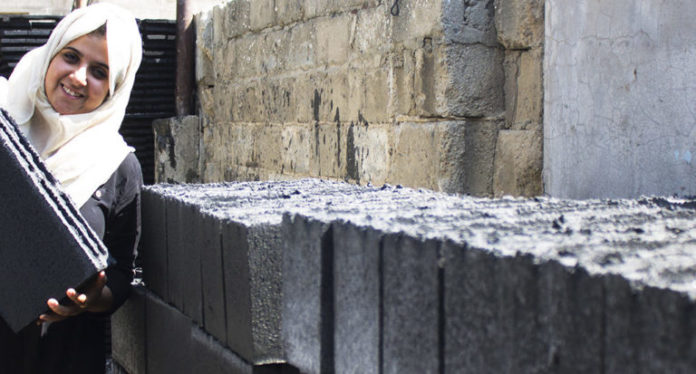 Two engineering graduates developed an affordable brick made from the rubble of war. This will allow citizens affected by the Israeli blockade to rebuild their homes.

Two engineering graduates developed an affordable brick made from the rubble of war. This will allow citizens affected by the Israeli blockade to rebuild their homes.

Two engineering graduates from the Islamic University of Gaza developed an eco-friendly brick made from the rubble of war that will allow people to rebuild their homes and community. According to Inhabitat, Majd Mashharawi and Rawan Abddllaht were inspired to create an accessible building material when confronted with the reality that an Israeli blockade poses.

Reportedly, Israel has installed a blockade to suppress Hamas, the militant Islamic group that has governed the Gaza Strip since 2007. Every object – no matter how small – that goes in and out of Gaza is documented. This is so the Israel Defense Forces can prevent Hamas from building new tunnels through which to smuggle arms. The blockade is highly controversial and is believed to adversely affect the Palestinian people. In fact, the UN has said the siege amounts to collective punishment in violation international humanitarian law.

Nonetheless, it remains. In effect, importing construction materials is oftentimes a demeaning, expensive, and time-consuming process. It’s for this reason that Abddllaht and Mashharawi collaborated to create a building block which could be constructed from materials within the city. Because Gaza has endured three wars within the past 10 years, there’s one item that is prevalent: rubble.