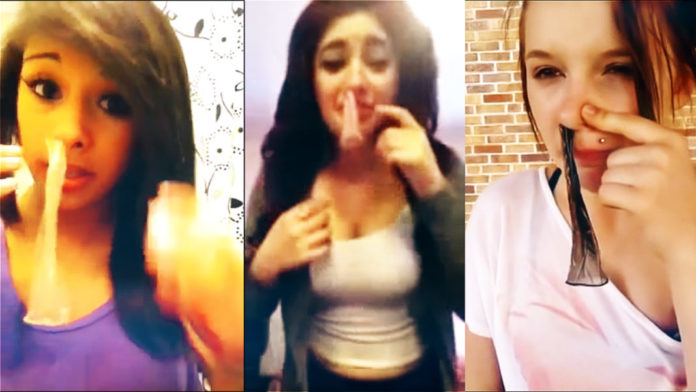 The Internet has changed a lot about the way kids grow up. Teenagers have probably always done dumb shit, but now you might see it directly on video in an instant, and millions of people might witness what was formerly just a private, crazy story.

Urban legends and rumors were the old way: now what could only be remembered through storytelling is sometimes visible to anybody in the world on YouTube.

So it was tide pods a few months ago…. Now the machine that regurgitates viral news is at it again and what has got to be a very, very small amount of people are doing this thing they call the condom challenge. People are snorting condoms through their nose, and pulling them out of their throats. They must not know that on top of the obvious ridiculousness of the idea, all kinds of toxic and irritating chemicals are in condoms. So because this sh*t generates views, every outlet from tabloid UK newspapers to Forbes, to Business Insider is reporting on this.

If people respond to dumb sh*t in the media, what they will get in response is a whole lot of dumb sh*t. This article cannot explain it with the terrible descriptive power of the websites that covered this. According to Unilad:

“So just what is the condom challenge. It’s simple really. Unravelling a latex smelling lubricated Johnny, snorting it deep into the labyrinths of your nasal cavity, and then pulling it out from the back of your throat. Nasty.”

Forbes worships doctors and the mainstream, and needs some kind of quote to fill the content of their article about this, so they got word from an associated professor at Johns Hopkins Bloomberg School of Public Health named Bruce Lee.

“When is using a condom a bad idea? When you are trying to snort it up your nose and pull it out through your mouth. If you ask, ‘why would anyone ever do that’, then you obviously haven’t heard of the ‘Condom Snorting Challenge’.

The condom could easily get stuck in your nose or your throat, blocking your breathing or causing you to choke.

Even if you manage to successfully pull the condom out through your mouth, inhaling a condom up your nose would be very uncomfortable and potentially quite painful. Would it really be worth all that just to get more likes and views?”

The expert listed various times in which people accidentally swallowed condoms. Things were mentioned like collapsed lungs, appendix’s being lodged (I don’t even know how that makes sense), blocked airways, ect.

This isn’t some epidemic of all teenagers being retarded. Generation Z, the people on Earth who are currently teenagers (post-Millennial), certainly are building a reputation for being ignorant to consequences.

However people need to realize this type of behavior isn’t some epidemic, it just looks more like that when viral videos are the way information is spread in this 2010’s decade.