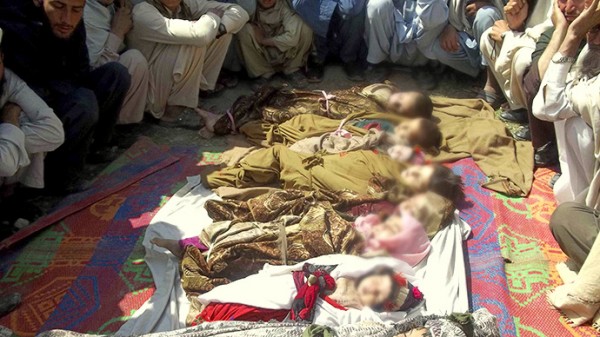 It is very common for Western mainstream media outlets to use the word genocide in places wherein their governments are not directly part of combat missions in an event of armed conflict. In Rwanda and Sudan, the word genocide is common to hear.

When it comes to places where Western governments are involved or are part of an armed conflict, it is very rare for us to hear the word genocide being used even in the face of overwhelming unjustified killings of innocent civilians. The majority of the people living in the Middle East are Muslims and they have been extremely affected by Western imperial wars on their land. While it may never be possible to know the exact death toll of modern Western wars in the Middle East, a new investigation has revealed that the number of Muslims killed in such wars could be 4 million or higher.

To put it in plain language, the United States and its allies fighting in the Middle East have committed, and are still committing, crimes against humanity.

In March of this year, Physicians for Social Responsibility said the body count of the Iraq War is around 1.3 million. The group even alleged that it is possible that as many as 2 million may have died and that number was hampered by inaccurate or unavailable data in some places.

A month later, in April, an investigative journalist, Nafeez Ahmed, argued that the actual death toll could reach as high as 4 million if one includes not just those killed in the wars in Iraq and Afghanistan, but also the victims of the sanctions against Iraq.

According to figures from the United Nations, about 1.7 million people died, half of them children, as a result of economic sanctions on Iraq adopted and enforced by UN Security Council Resolution 661, put forward by the United States government in the 1990’s. The Mint Press News reports that in the aftermath of the 9/11 attacks, President George W. Bush employed a curious and controversial choice of words in one of his first speeches. He alarmed some by referencing historic religious conflicts. This prompted The Wall Street Journal staff writers, Peter Waldman and Hugh Pope, to say, “President Bush vowed … to rid the world of evil-doers, then cautioned:  This crusade, this war on terrorism, is going to take a while. Crusade? In strict usage, the word describes the Christian military expeditions a millennium ago to capture the Holy Land from Muslims. But in much of the Islamic world, where history and religion suffuse daily life in ways unfathomable to most Americans, it is shorthand for something else: a cultural and economic Western invasion that, Muslims fear, could subjugate them and desecrate Islam.”

In the wars the US fought in Iraq and Afghanistan in the name of ending terrorism, the US did not only kill millions… it systematically destroyed the infrastructure necessary for healthy, prosperous life in those countries. It thereafter used rebuilding efforts as opportunities for profit from oil and other scarce resources of these poor countries.

To add to the genocidal pattern of behavior, there is ample evidence of torture and persistent rumors of sexual assault from the aftermath of Iraq’s fall.  Commentators say it appears likely that the US has contributed to further destabilization and deaths in the Middle East by supporting the rise of the self-declared Islamic State of Iraq and Syria (ISIS), arming rebel groups on all sides of the conflict.

This Article (Genocide: 4 Million Muslims Killed In Western Wars In The Middle East) is free and open source. You have permission to republish this article under a Creative Commons license with attribution to the author and AnonHQ.com.